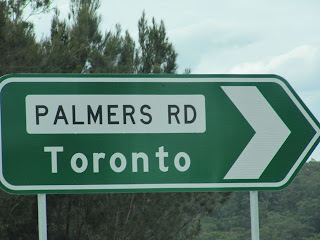 Sorry to leave you all hanging Monday but I figured that everybody loves a good cliffhanger. It has been over a year since I’ve been home so you can imagine how excited I was when I found out about the wormhole that could take me all the way from Circular Quay to Queen’s Quay. Our destination that Tuesday was that famous city on the lake: Toronto, Australia.

I was amused beyond words when LoJo mentioned we could visit Toronto on our way to Newcastle. After all, it isn’t often you find a city at the bottom of the world named after an Iroquois word meaning "place where trees stand in the water.” The world is replete with Waterloos, Yorks, and Londons but I always thought Toronto was fairly unique. 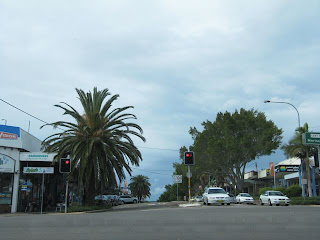 My curiosity got the better of me and I was determined to find out if Toronto South, as I started calling it, was actually named after the city of my birth or if it was an incredibly bizarre coincidence. According to the Lake Macquarie Historical Society, the city was named for a very modern reason: publicity. In the late 1880’s the resort town still had no name and was visited by Edward Hanlon, a world champion rower from Toronto, Canada. Perhaps hoping to gain an edge on the budding 19th century tourism industry, they named the resort on Lake Macquarie ‘Toronto’ in Hanlon’s honour.

In an amusing twist of fate, sports would once again unite the two Toronto’s over a hundred years later when the winner of the 2009 RBC Canadian Open Golf Tournament was won by Nathan Green – a Torontonian from Down Under.

Further proof that Toronto, Australia shares its heart with Toronto, Canada is evident the moment you speak to one of its denizens who know enough to drop the T’s and pronounce the city’s name “Chorono.”

Somewhat smaller than its Canadian sibling, this Toronto boasts a palmtree-lined main street and its own version of my city’s Royal Canadian Yacht Club. One of the most populous cities in New South Wales, Toronto has a thriving business community and yet still manages to maintain a small town quality that I found quite appealing. 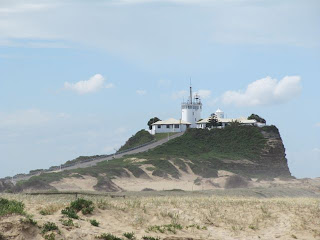 Later that day, LoJo drove me from Canada to England. Located 165 kilometers North of Sydney, I was surprised to learn that Newcastle is a popular commuter town and many of its inhabitants make the daily trek all the way into Sydney. LoJo and I wandered along Nobby’s Head before heading to Swansea, on the banks of Lake Macquarie for lunch.

By the time we arrived back in Darling Harbour, I felt I should have had my passport stamped several times that day alone. I had traveled from Australia, to Canada, to England, to Wales, and then back to Australia in a matter of hours. Three continents in one day is pretty impressive by anyone’s standards and I still had two more days of traveling with LoJo ahead of me.
We wander for distraction, but we travel for fulfillment.
~Hilaire Belloc
Posted by MsTypo at 2:48 PM

You have the most interesting life!

Thank you for enlightening me on my own history. I just learned how my Toronto got its name. I'm glad there was a connection. Thanks mate.

Ahhh. Now it makes sense. I wonder if Hanlon's Point (Toronto Islands--Canada) was named after Hanlon.
As you know I was born about 20 miles from Swansea.
What an interesting counrty you are in!
merthyrmum
{Love the quote}