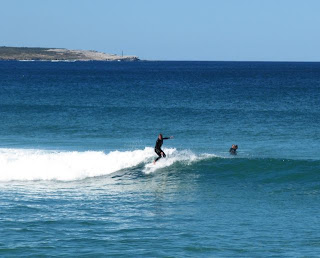 The only thing better than meeting new friends is catching up with old ones. When I first decided to runaway from home and head to Oceania, one of the first plans that formed solidly in my mind was reuniting with my wonderful friends from ecfans. A large group of us had met in person four years ago on the occasion of my first visit to Australia, and I was excited to have the chance to see my Aussie girls once again.

Shortly after arriving in Sydney, my friend LoJo, a lifelong Sydneysider, took it upon herself to show me the hidden secrets and beauty of the area she calls home. During our first three days, we covered hundreds of kilometers, countless breathtaking vistas, a dozen beaches, and shared innumerable stories on our way there.

At promptly 10:30 each morning, LoJo picked me up in front of my flat and we would start off on our adventure for the day. Since I had just been to Bondi the day before, Monday kicked off with a drive to Sydney’s other famous beach – Manly. Australian summer had not 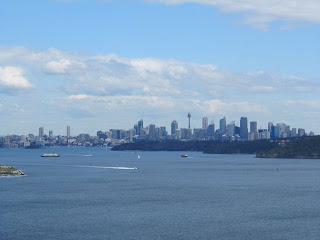 yet officially begun, so there weren’t many surfers in the chilly waters but those that were seemed to be enjoying the relative quiet to be found in the water on the first day of the workweek.

Although LoJo didn’t say as much, our next beach, Cronulla, felt less touristy than either of its better-known cousins. The boardwalk in Bondi is replete with shops selling everything from surf gear to Bondi branded t-shirts. Cronulla, on the other hand, seemed quieter and less exploited by the locals who seemed to love its more natural charms.

I never truly appreciated just how large Sydney really is until I unfolded myself from LoJo’s car at North Head. The city stretched before me in literally every direction. The Harbour Bridge peeked over a ridge to my right while the local ferries passed across the water in front of me carrying tourists and locals alike. LoJo pointed out the best places to watch the city’s world famous New Year’s pyrotechnics show, as I soaked in the sights before me. 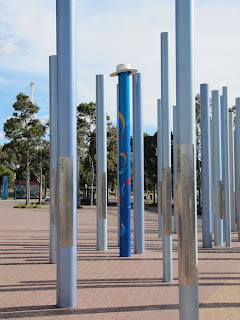 Since my own beloved home and native land recently hosted the Winter Olympics, I was keen to see our next stop: the grounds where Sydney hosted the Summer Games in 2000. The extensive area we drove through was home to enough stadiums and sports complexes to have any top-rated American college salivating.

Although the crown jewel in this Olympic park is certainly the newly named ANZ Stadium, I was far more taken with the newer installations: specifically the tribute to the thousands of volunteers that helped make the Games such a success. I don’t know if such a tribute is traditional at all Olympic sites but it should be.

LoJo and I wandered around posing for photos, and she told me about what it was like to actually attend live Olympic and Paralympic events. Ten years ago, the street where we parked was wall-to-wall people as fans from around the world poured into the city for a chance to witness sports history. Canada, it should be noted, walked away with a whopping 14 medals that year.

I'll be sure to see all this when I get to Australia ;)

You went home? Dying to hear where that is now.
Great pictures once again.
merthyrmum

You're obviously having a great time in Australia Typo, good on you! I was livnig in Atlanta when the Olympics was held in the late 80s and it was fantastic. Plus, I was writing for a magazine and got to do several interviews... more fantastic.