Another Day in Paradise (Part 2)

As promised there was a really wickedly cool part of the day yet to come… And a wickedly sucky part of the day. I have decided to start with the awesome part first – it doesn’t hurt that it also happened first chronologically speaking.

After lunch we were told that if we wanted to there was an opportunity to go parasailing. Now Hubby and I had actually discussed this very idea less than a day before this particular outing; so it seemed rather odd (and cool) that we were being given this opportunity. So we gathered the details: it wasn’t going to be too pricey, it fell into our scheduled free time, and we could do it in tandem. After a brief powwow we grabbed our towels, sunscreen and camera and piled into the motorboat.

Our speedboat driver was certifiably insane. I seriously wonder if he got paid more if he dumped one or more of us out of the boat prior to arriving at the floating dock. He seriously had the boat vertical with Hubby, me and the other 3 couples screaming in glee and hanging on for dear life. In case I forget to mention it later: he did the same thing on the return trip. 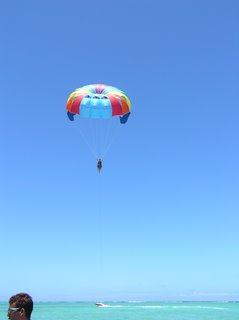 Parasailing took flight off a floating dock situated right of Ile aux Cerfs. At my request we did not go first. When it was finally our turn we were strapped into our individual harnesses and life jackets. As with the other couples from our boat, we opted to go together in tandem for this adventure. The team before us touched down lightly and we were urged forward. Hubby, as the taller of we two, was strapped in behind me. After a few very brief instructions we saw them give the OK sign to the boat driver.

To start off, I was sitting in prep for takeoff in what must have been the wrong way because I ripped my foot along the carpeted runway at takeoff. Picture rope burn: now move it to your foot and that was me. After that bumpy start we were aloft, at least 100 feet in the air with only a parachute and a piece of rope keeping us from falling to our doom. All that said, it was exhilarating, not to mention quite romantic – the two of us alone in the sky with only each other for company. Perfection.

With my hands grasping the harness above me, I was essentially sitting/dangling between Hubby’s legs, as we looked down on Ile aux Cerfs and its surrounding lagoon. Each shade of blue water seemed somehow more vibrant from our lofty vantage point. We waved at the miniature people on the dock and wished that our ride could last forever. 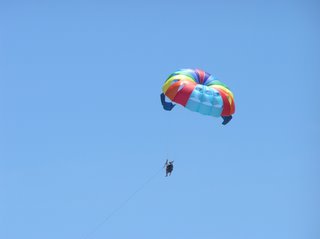 Then suddenly it was as if the boat driver got tired or bored or something. Below us he cut his engines and we began to float down toward the warm coral lined waters beneath us. When we reached the rather worrisome height of about 10 feet the driver woke up and pulled away. Squealing with delight we touched down briefly enough to soak our legs and bottoms and then we were quickly flying high again.

Of course we had to land sometime… unfortunately. Ours was not only not the smoothest landing of the day; I would venture it to guess it was one of the worst ever. Ooops! The bruise on my thigh is a reminder that next time we should ask for landing instructions before actually coming in for a landing butt first.

I officially and thoroughly recommend parasailing to you if you should ever get the chance. It was a thrill that we hadn’t planned on and one of the true highlights of our entire trip to Mauritius.