Another Day in Paradise (Part 1)

I should begin by explaining that I literally have almost ten pages of notes just on what we did on the Tuesday we were there. With that in mind, I’ve decided to split this one up over a couple of days so as not to kill blogger with my squeals about how absolutely awesome a day we had. How awesome? Well you’re going to have to read to find that out but let’s just say that this is the day when I get sunburned, have the adventure of a life time, and had my the bottoms of my feet flayed. Cool, huh?!

The day started with us getting picked up at our hotel in a taxi for what turned out to be an hour and half long drive to the other side of the island. Do any of my Canuckian readers remember that show on TVO with the mime and the French voice-over dude? I can’t for the life of me remember what it was called but I do remember that I hated it. (Naturally, TV addict I am, I still watched it though. Expect a future blog about the coolness of TVO back in the day.) The reason I didn’t like it was that the voice-over dude had this weird accent that gave me the creeps. Well I have now realized that the voice-over dude must have been Mauritian because our taxi driver sounded *exactly* like my memory of this show.

The ride to Trou D’Eau Douce was long but uneventful. When we finally arrived 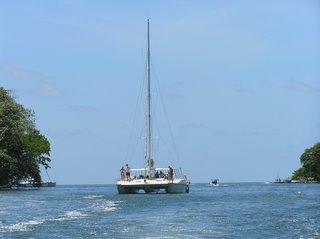 we saw a bay filled with various sized boats: all, it turned out, there for the same purpose: day trippers like Hubby and I. Our boat was a medium sized catamaran crewed by the skipper (and his daughter) and three crewmen who helped keep us fed, watered, and kept the sails aloft as needed. I should note that “us” consisted of Hubby and I and about 20 other guests including a leathery old woman that should not have been wearing a bikini but probably should have been wearing some sunscreen. There were also several families and a couple of honeymooners along for the ride.

We sailed into the perfect blue of the bay and around the craggy reef in water shallow and clear that I could see the bottom. Hubby kept me from trying to touch it by threatening my book. Evil boy.

One of our first stops was a cool little waterfall. 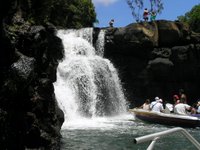 (No I am *not* obsessed.) They took us right under the falls in the little motorboat that had been attached to the catamaran with some rope. The cool water from the Falls was refreshing after the heat and had everybody in the boat giggling and covering their cameras for dear life.

I spent much of my time getting some sun and reading my book. It was an incredibly good book that I simply could not put down until I had finished it. Of course, I probably should have started the day by using sunscreen instead of waiting until after lunch to apply my first coat. Oops, my bad! 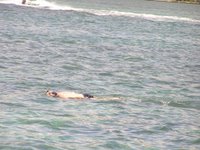 I could in as short amount a time as possible. I wasn’t all that good at snorkeling although Hubby, as always, proved a great gun and stayed in the water for quite a while. (It turns out that this isn't actually a photo of Hubby just some random guy. But at least you'll get the idea of what we did... or something.)

Lunch was a relaxing affair consisting of fish that was cooked on a grill off the back of the boat. The fish was amazingly tender and flaky yet still tasted sweetly of the coal and fire. This was accompanied by saffron rice, potato salad, break and wine which turned out to be slightly too sweet for my taste. The meal was topped off with slices of coconut and bananas for dessert. Light and yummy all around.

After lunch we got started on what turned out to be both the highlight and lowlight of the day. But those will have to wait for the next episodes of Blog.