A Cool Dip in the Ocean 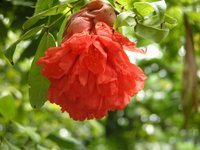 We awoke the day after Christmas to realize that too much rum doesn’t hurt that much when you have fresh crepes and hot chocolate (coffee for Hubby) to soothe you when you wake up. Since we had definite plans for the day, Hubby was not going to let me sit around reading my new book, “Outlander” no matter how much I pouted. (Dang, this is a good book! Thanks Aunt B!)

After I graciously gave into Hubby’s desire to do touristy stuff, we piled into the car. Our first stop was the “Sugar Adventure” in Pamplemouses. Despite signs that boasted that they were open 7 days a week, the evil sugar adventurers were closed. Damn false advertising. (Their excuse that it was the day after Christmas was not a very good one, if you ask me.) 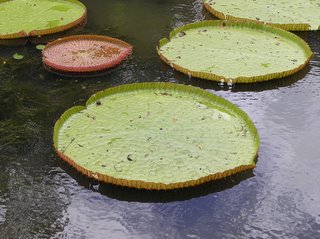 Dejected, we headed over to the nature walk in Pamplemouses proper. Ok, a moment of interjection if you please. I love grapefruits either in their halved form with a sprinkling of sugar, in sections for breakfast or better yet in juice form. So the thought of going to a town named after these yummy fruit sounded very cool. That said they didn’t even give away free Pamplemouses at the door. *pout* Again with the more false advertising. 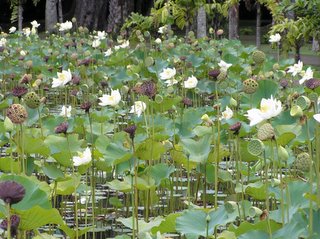 But we had a walk to do so we parked the car, slathered on sunscreen and wandered into the nature preserve. The coolest part of our nature walk was getting to see where Kermit the Frog lives: these wickedly cool giant lily pads that come in both pink and green apartment options. We also saw where Kermie goes to romance Piggy when she’s in town: the tiny lily pads probably wouldn’t hold her but I’m guessing that she likes the flowers in this pond.

In keeping with my new obsession with waterfalls, 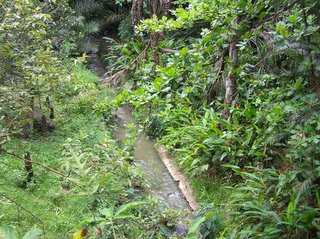 we saw another cool one. From the top of the bridge it looked like a tropic forest. You looked into the oblivion of nature in every direction.

When we wandered down the path to the bottom of the waterfall it had a wondrously different view entirely. It was like the door to 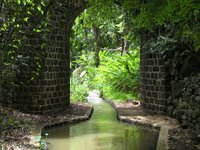 fairyland had opened and was giving us an achingly brief peek into its enchantment. I swear that I saw some sort of ethereal creature fly by and wave at me. (Of course I was very hot and we had run out of water so it *may* have been a hallucination. Maybe.)

The overall effect of the entire preserve, other than being wickedly hot, was one of peacefulness. There were beautiful tropical flowers and tiny multicolored birds in every direction. I wish I could share all the photos we took so that you could share, electronically, the beauty we witnessed in Grapefruit-land.

After our walk we headed to Grand Baie and, since this is me we’re talking about, to lunch at Spur, a South African chain we remembered from our previous trip to that wonderful country. In typical Typ0 fashion I had a cheeseburger while Hubby munched on fajitas. Some things, no matter how tas 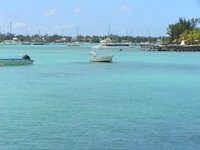 From there we made our way to our big destination of the day – the Under Sea Walk. First we had to meet our water taxi at a jetty not far from our lunch spot. And we waited. And waited. And waited. The other people who had signed up for our time were quite late and, as we watched them on the shore, had no intentions of hurrying themselves. The boat driver and I exchanged (in French) pleasantries and insults about the lateness of the other guests to pass the time.

The French chatting turned out to be a good thing as he shared our confab with his cohorts aboard the main boat and they made sure that we stayed underwater the longest and, in think, had the most fun. Yay French immersion!

Unfortunately we have no pictures from our digital camera of our time under the sea so you’ll have to use your imagination. We do have regular photos that the tour operators took but we still haven’t had them developed. As we listened to the dive instructions we donned our swimsuits, ocean shoes and a weight belt: the latter two were provided by the he boat operators. 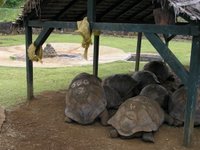 We then descended the ladder at the stern of the boat. Once we were mostly immersed, they put these glass and steel helmets over our heads and settled them on our shoulders. The helmets were glass above and 360 so that we could see the beauty of the ocean’s depths (all 3 feet down of it) in all directions. The helmets weren’t secured and we occasionally felt the helmet filling with salt water.

(Quick note, the photo to the right was taken at Pamplemouses and not on the Under Sea Walk but Hubby and I felt that it needed to be included. Naughty giant turtles! You go boy!)

The fish we saw the most of was this cute little black and white fish that Hubby kept trying to capture by the tail. Thankfully he was unsuccessful. We also saw little Nemo fish and other tiny clown fish living in a bit of coral near our dive spot. In total we were under the water for just over 30 minutes.

I must say that it was a wickedly cool experience despite the salt water in my hair. But having the chance to breathe, swim and dance under the ocean was a priceless opportunity.
Posted by MsTypo at 11:51 PM