Nature at Her Best

The time had come, the walrus said, to talk of many things: of sight seeing and souvenir buying, of cabbages and kings. Or something like that. (BTW, bonus points to those smarties among you who actually know where my slightly bastardized quote comes from.) Well, the walrus had a point: we needed to stop drinking long enough that he would stop talking to us, and we really did need to get to seeing this island before it was too late and the rum monster came to take us prisoner again.

We piled into our crappy car and headed off into the wilderness. Now, I need to explain that our car was slightly crappy despite the fact that Hubby is an awesome driver on the stick. Here’s the low-down (which he will, I’m sure go into in more detail in a guest blog): basically the Malaysian POS, Proton Wira for the curious, came with three options: Drive, Use the AC or Listen to the Radio. Unfortunately, we weren’t allowed to do any of these things at the same time without the car conking out on us. We met our goal of seeing ½ the island in 2 days but the car was a big chunk of the adventure.

One of our first stops was this Chamarel Falls. 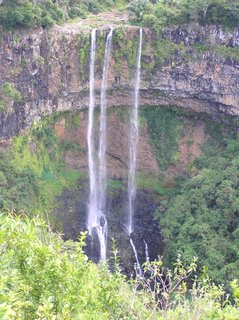 If you’ve ever heard me talk about Niagara Falls then you’ll know that I’m a huge person for water falling over rocks. *yawn* Niagara Falls can only be described as majestic during the height of its tourist season. (I, on the other hand prefer it during its frozen, iceberg time in February). Chamarel isn’t majestic; it’s certainly not in the running to help the island create hydro electricity, what with its three small steams of water. All that said - it was beautiful.

We had to walk up a small incline to get to the viewing plateau. The first thing I noticed was that there was beautiful forest all around with hundreds of beautiful trees just waiting to be climbed. Then I turned and saw the falls from across the distance of the vividly green valley. At the top was a shallow river that looked like somebody should be skipping rocks. Then it broke off into three steams that fell 83 meters straight down into what seemed to be a movie set of a valley. 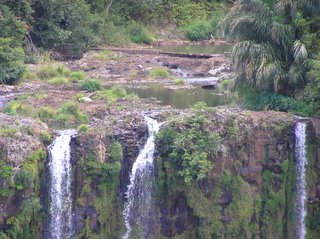 why this place impressed me so much except to say that it was incredibly peaceful in its existence. It didn’t want to be Victoria Falls it just wanted to feed water into depths of forest that surrounded it. It was so peaceful standing there watching the Falls with Hubby’s arms around me. I found a point of serenity at Chamarel: a chapel of nature if you will. Life was at peace with itself in that tiny corner of the planet.

Only a short distance from the Falls was a Chamarel Colored Earths and, more importantly, the turtles. 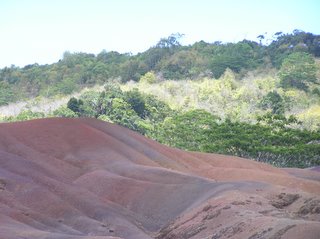 Allow me to explain the mundane first: these sands are naturally colored for reasons that have something to do with lava and its cooling effects. The sands really were cool and ranged in color from vibrant purple to dusky orange. (Sadly not all the colors show up to their best ability in our photos, sorry.) They sell bottles of the sand for a slightly more than nominal fee so that you can take home this amazing wonder. Here is the actually cool part: you can mix up your bottle by shaking it like martini, but the sands will automatically rearrange themselves back in order. Freaky deaky huh?

And now for what I thought was the cooler part of this stop: the Turtles! For reasons that nobody shared with us, the Colored Earths site was home to four gigantic turtles who hung out in a shaded pen. When we were there one of the turtles was active while the others looked like they were embarrassed to b 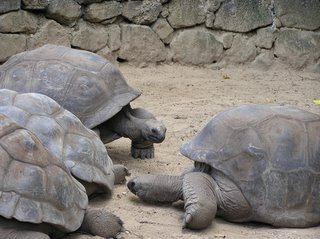 e there. Hubby said they were embarrassed of the way I was going on (they *could* be mutant ninja turtles!) but I think they just wanted the option of wandering over to the sands and putting their shell prints in the purples parts. Either way they were sooooooooo cute and despite what Hubby things, probably would have been happy to come home with us.

Before I sign off this episode of Blog, I need to further expound on how beautiful this island can be. You see, in order to get to Chamarel, we had to drive up one of the many mountains that dot the landscape. Fear of the car dying on us half way up not withstanding, 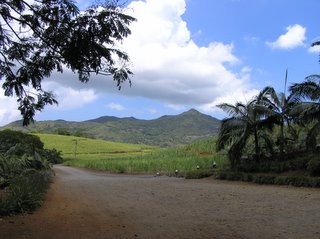 it was a beautiful drive. I swear to you that I have before seen quite so many shades of green in one place. Each tree on the mountain was a different variation on the jade theme. The Green Island indeed…

Hubby and I have traveled all over and rarely have we both been in agreement about how singularly beautiful a place was. I now finally understand why Hubby says that this is one of his top three favorite nations. Of course he came to that conclusion when he was there on vacation with out me… Hmmm….
Posted by MsTypo at 4:03 AM