I have many firm beliefs about Christmas. But one that is pivotal is that it requires snow. “I’m dreaming of a white Christmas” isn’t just a song people it’s a way of life. Hubby on the other hand, grew up in California and never knew snow until much later in life. It is with these two divergent views of the holiday season that Hubby and I arrived in paradise. But one thing we both agree on is that Christmas-time is about food: lots of great food! With that in mind, today’s blog is all about FOOD!

Christmas Eve we did fun touristy stuff that I’ll talk about later but more importantly we ate some very yummy food. After touring around the southern part of the island, Hubby drove us to this Creole place that he had been to during his last visit. . Keep in mind that Creole food here isn’t what you get back in the States – it’s more of a mixture of Indian and island cuisines. I feel that I should also explain that the while the ambiance was great (an outdoor terrace surrounded by tropical greenery) the food was divine.

After a nice salad, accompanied by a glass of rum punch, they served our lunches. I had a shrimp and chicken curry that was so light yet flavorful that I wanted to order seconds after trying only a few bites. For dessert we shared Banana Flambé that could never, ever be served to minors. There was so much rum in and around those bananas that I’m not sure that Hubby should have driven home. Dang that was good dessert. (Yes, Hubby also ordered food but since mine was better so that’s all that I remember.)

We eventually made it back to our hotel and got ready for dinner. Dressed in one of my silk salawar-kameez and the necklace Hubby gave me for Christmas I accompanied Himself down to the dining area that had been decorated for the occasion. We plunked ourselves down in our usual seats and asked the waiter to open the bottle of Argentinean red wine that we had purchased in the Dubai duty free for just this purpose.

After a while we started looking around to see what would be served at the buffet this evening. 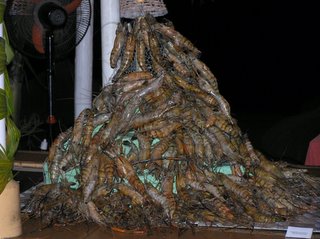 We were both amazed at the plethora of food that awaited us, but especially at the literal mountain of giant prawns sitting next to the grill. While I first readied a plate of salads Hubby made a beeline straight for the prawns. Noticing that the line for these mammoth delicacies was huge, I wisely asked Hubby to grab one for me.

Much of the food we had over the two weeks at the hotel was rather average to below average – but not on Christmas Eve. Dang that was some good BBQ’ed prawn. Now, keep in mind that I’m not known as a seafood fan but these prawn were so tender and flavorful that if they hadn’t all disappeared in less than 30 minutes I would have sent Hubby back to get me more.

While we ate were serenaded by a keyboard player and the singer that we dubbed Barry White. 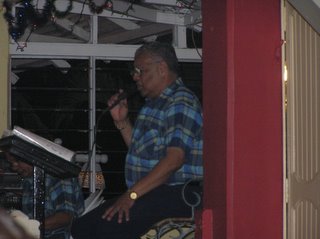 Barry had a deep, hypnotic voice as he sang various English and French holiday songs for us. The problem was that he didn’t actually speak English as his first language so some of the English songs were slightly different from what we remembered. “Jinge bells, Jinge bells, jingal all da way. Oh what fun it is to ryde in a one horse hopen Slee!.” We joke and mock but he was quite good entertainment and excellent fun even more so because he was so earnest.

I’ll comment on dessert for the evening if only for my Mum whom I’m sure will be jealous. Along with the fruit salad, chocolate cakes and profitte rolls was a giant Croque en Bouche. The best part of this dessert (other than the taste) was that I finally learned how to serve one! They cut into the middle and served from the inside out. Neat, huh?

The final touch of 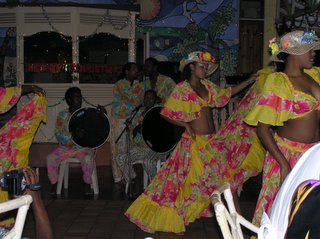 the evening was live Sega music and dancers. There were four musicians: two on drums, one on triangle a singer. The drums were a cool island hybrid: they sounded like cross between Jamaican steel drums and looked like Irish Bodhrans. After the dancers each had their turn in groups and solos they invited the guests to join them. It should be an indicator of how much Hubby had to drink of that bottle of wine that he actually danced with me.

But now it was time for all good little tourists to go back to their rooms and sleep and await Santa. Not being good kids or tourists Hubby and I decided to go to bed anyways just in case Santa got lost and felt like dropping of some gifts for fun. Nighty Night!
Posted by MsTypo at 5:22 AM