A Sleigh Full of Rhum

After a blissful night’s sleep we awoke to find out that Santa had visited and left us with all sorts goodies including French books about Dodos and model ships among other goodies. We toasted in the warm Christmas morning by getting toasted on a Swarovski Crystal studded bottle of Moet and Chandon champagne. The chilled bubbly was the perfect start to a day that would be highlighted by lots of alcohol.

We drove around the island rather aimlessly for much of the day. 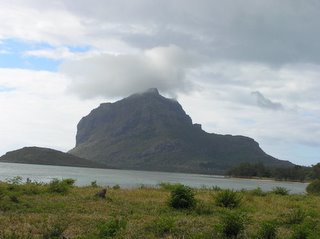 Our attempts to go on a tour of a rhum factory were thwarted. Just because its Christmas they think they can be closed? How rude! The countryside was a beautiful mélange of green interrupted only by the blues of the ocean that surrounded us. But all that fresh air and nature only served to remind us that we were hungry – as usual.

Lunch was a disaster of Chinese food that should never again be spoken of. The ginger beef was literally gelatinous. *shudder* But it was ok because we were going to move on from there to a traditional Christmas dinner shared over candlelight with romantic music and a general buzz of Christmas in the air. Ok, so it was a tasty if less than traditional meal, and the buzzing came from the mosquitoes that were stalking me but there really was a lit candle!

The dinner being offered at the hotel looked less than appetizing so we wandered into town to see what local delicacies might be available for Christmas dinner. After realizing that most restaurant proprietors were closed for the holidays we turned down an alley and found our perfect meal.

The building was actually a backpackers haven with a semi-Italian restaurant attached. We had heard that the pizza here was some of the best in town and, after a cursory look at the menu, were seated in the corner under an awning of trees and other local greenery. We were presented with the drink menu first: since I didn’t want to spend my entire vacation under the haze of lush-hood I ordered a coke. Hubby had no such compunctions and ordered a drink called Planters Punch, which was a concoction of rum, juice, soda water and grenadine. I was dubious and awaited my coke.

While we debated what we wanted to eat on this holy day our drinks arrived. Hubby’s rum drink was a pretty red color and, he claimed, quite yummy. Not trusting his ability to decide what constituted a good drink I stole his glass and had a sip. Then another sip… then another. Worried, our waiter rushed over to our table wondering if there was something wrong with the drink. I insisted that there was something wrong: that I didn’t have one too.

By the time Hubby and I had both eaten our decidedly yummy pizzas we had also managed to each drink 2 more Planters Punch each. Well, we had to see if the first ones were flukes! We were doing our civic duty.

During the meal we were serenaded by a very talented guitarist who sang romantic songs that, when combined with all the rhum punch, made for a perfect evening.

We then made our way back to our hotel where we enjoyed two more glasses of punch each. 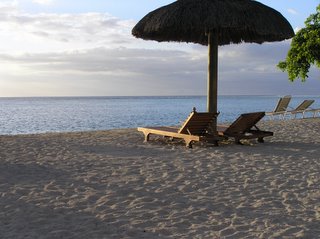 This time we drank while watching the stars and sitting on the beach. It was quite a romantic (and slightly alcoholic) end to a pretty wonderful day.

So there you have it: traditional Christmas dinner of pizza and rum punch, a visit from Santa all on a romantic island. Even though we didn’t have a white Christmas we had a wonderful one. Happy Christmas in Mauritius! (See it does rhyme!)
Posted by MsTypo at 2:52 AM