I’ve been giving you in depth thoughts on everything from what we ate and drank (mmmmm rum) to what we saw and even what we drove. But there are things we experienced in Mauritius that don’t fall quite so neatly into a category or even a normal blog. So I’ve decided that it was time for another random blog to explain some of the weirdness.

Please note in advance that basically every paragraph is a new story and there is little to no continuity involved here other than that they are all about Typ0 and her Hubby and Mauritius.

I’ve got to start with “Teri Garr Chick” as we dubbed her. Teri Garr was this middle-aged woman who seemed to think that she was 23 and had a body that rivaled JLo’s. She wasn’t and she didn’t. Teri could, at any point in any day, be found lying on a lounge chair by the pool topless. I am not a prude but this was a scary sight by anybody’s standards. He... I mean she, had small saggy breasts that just didn’t need to be shared with the world on an an 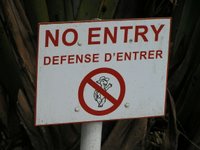 nual let alone daily basis. (Hubby wanted to interject that they weren’t saggy just leathery from too much sun. He should know; he was looking often enough!) Plus she smoked which only served to make her look even less attractive. The worst of Teri’s crimes: she and her lapdog of a husband took our table one night for dinner. Grrrrrrrrrr.

One of the things Hubby and I always judge when we go to dinner or are wandering around a mall or the like is the soundtrack. What music an establishment is playing while I share oxygen with the other inhabitants of that space happens to be very important. Pizza Place, for example, always played great music. Our hotel’s selection was rather erratic and occasionally moved in favor of really bad 90’s music rather than sticking to the good Sega Remix that it did so well. The one crime the entire island nation shared was an obsession with Celine Dion. Every-freaking-where we went they were playing Ms. Dion’s music in either English or French. It was enough to drive a body nutty.

The height of unfairness happened during our second week in Mauritius; I got a sunburn and Mr. Pasty White didn’t even get pink. Life, like so many things around me, is unfair. After a day spent in the sun with, what turned out to be not enough SPF 60, I returned to the hotel with a red back, red arms, pinkish legs, a red face and parts of me we don’t discuss in blog were also rather pinkish. Ok, so I didn’t use any sunscreen until around 1 in the afternoon that is no reason for nature to punish me. Is it? Of course, good genes (and what Hubby called unfair) came to my savior early the next day as I woke to find that my face, arms and legs were all now a rather happy shade of tan. See, sometimes life can be fair. 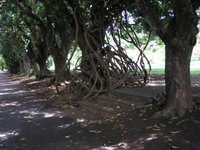 That reminds me, my molting back is itchy again… Hubby!!!

We all know about my obsession with food in general and with the sweet treat from India known as Jelabi. Well on this trip I learned where Jelabi come from: the Jelabi tree!! (Hubby says that I’m wrong on this one but look at it!)

Ok more to come later…. Seriously though, we hope you’re having as much fun reliving Mauritius with us here in the Blog as we are. And if you’re not… *sniff* Well, there’s only a few more days to tell you about then we’ll get back to the usual blogs about Delhi and our lives here.
Posted by MsTypo at 11:30 PM