Our arrival in Mauritius was heralded by the grand event of our standing in the immigration line for about an hour. Don’t get me wrong, I understand the need for immigration lines but damn the thing could have moved faster. At least, in a rare occurrence, Hubby actually picked the fast line and we were out of there more quickly than most.

We took a taxi from the airport on the South Eastern coast to our hotel in Flic en Flac on the Western coast. If you’re lookin

g at the map, we were just north of Tamarin. The entire village basically serves the tourist trade and the umpteen hotels that dot the azure blue coastline. If you’re an NPR fanatic like me, you can join my new revolution of calling our base town Flic en Flac the Tappert Brothers… or not.

Our hotel was not the fanciest one in the village by any means but it served our purposes well – a place to come back to after a long day of sightseeing and breakfast and dinner thrown in for free. The food wasn’t always great but the view from the dining area could not be beat. I never realized before how many shades of blue made up the ocean.

The views at night were no less amazing. The southern sky in a night with no light pollution is beautiful beyond words. At home you’re lucky if you can see a dozen or so stars in sky… Mauritius was completely different – there were a dozen different stars in every square inch of sky: I had never before realized how many stars there were. Mars lit the night sky directly in front of our room. The clusters of tiny stars made even a cynic like me wonder for the days when sailors guided their destinies by these pinpricks of light in the darkness. (Of course for true geeks like me it also made you wonder about how cool they would have looked up close for Picard and his crew on board the Enterprise D.)

The stars seemed to move through the velvet sky on their own volition. Hubby said that they weren’t actually moving that I had just had too much to drink. But I disagree. They were dancing through the sky for the benefit of believers like me. 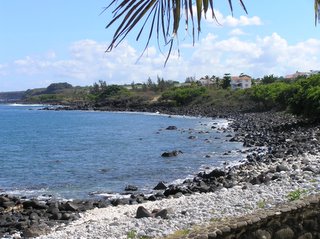 During the day, the view from our balcony changed again: a series of palm trees and a million miles of blue ocean. Perfect day or night from as far as I was concerned.

Ok weird note: one of the few days we turned on the TV two things happened. First, there was no Becker on and this made me very happy. Then we found a channel where Dallas was just beginning that day’s episode – in French. Even the theme song had been translated. It was beyond funny!

Mauritius, for those of you who may not know, is a French-speaking nation. Which meant that I had to dredge up a language I once knew so well I would dream in it. Of course, it’s been more than a decade since I had last spoken at any length in French so I was a wee bit worried about how I would sound. I needn’t have worried. Every time I opened my mouth and spoke French two things happened: First a look that said, “I thought she was American” passed over their faces. Then they’d immediately say, “Oh, you’re Canadian! From Quebec?!” While I’m pleased with how much French I remembered I am more than a little perturbed that my accent so expertly pinpoints me. It’s not that bad a Québécois accent is it? Ok never mind, don’t answer that.

Port Louis, the capital, is a cool place to spend some time. 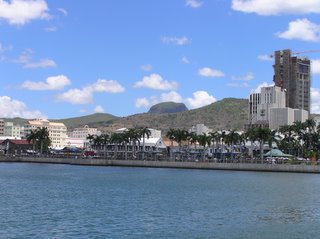 There can be little doubt that the inspiration for the harbor here was that of Cape Town’s own Victoria and Albert. Small shops to deke in and out of, bars that played loud Sega music and just generally happy people lined the harbor area. Although I didn’t do as much shopping as I had hoped, I still helped out the GDP of the island nation by purchasing a few Christmas gifts for both Hubby and myself.

Our first day in Mauritius was amazing. Still to come was Christmas Eve, Christmas, and a week of nothing but fun, relaxation and sun. Each day got progressively better and we became progressively more relaxed. The only problem with Mauritius was that the vacation didn’t last longer. Dammit.
Posted by MsTypo at 4:49 AM