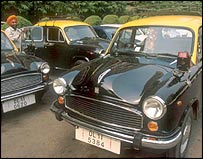 After realizing that I totally missed out on having an excellent April Fool’s Blog, I insisted to Hubby that he make everything better by taking me out to lunch and getting me intoxicated. Presented with this challenge, he decided upon Nikko’s where we would have all you can drink Champagne and all you can eat sushi for Rs. 1500. This alone would have made it a wonderful day- but there was an even better treat yet to come.

One of the many things I wanted to do prior to the Big Move was to have a ride in an Ambassador Car. These uniquely Indian mode of transport are produced by Hindustan Motors and were originally modeled on the old British Morris Oxford. Moreover, they are virtually omnipresent here in Delhi as they are the preferred vehicle for minor Indian officials, taxi drivers, and nostalgic expats alike.

Made from seemingly indestructible steel, these cars tool around the streets of Delhi and are second only to the even larger and even more indestructible DTC buses. The men who drive these cars are, by and large, insane lunatics with even less regard for road safety than the usual Indian driver. I assure you that this is a prospect that lives somewhere in the region of beyond scary. I actually witnessed a motorcyclist bounce rather ungracefully off the hood of an Ambassador and have his bike (and him to be honest) end up rather the worse for wear as a result of the encounter.

Hubby considers these cars throwbacks to the old colonial age and hates them accordingly. It is his opinion that India should cast off its fleet of Colonial-mobiles and develop its own car that would be uniquely Indian rather than un-uniquely Queen Mum. I can see his side but I love these old cars and I finally got to ride in one yesterday.

Since we didn’t want to drive home from Champagne-a-palooza we ordered a taxi at the hotel and up drove my green and yellow chariot. Admittedly the behemoth had no air-conditioning to speak of but the huge couch of a back seat was roomy enough that even Hubby had to admit that we had a comfy ride home.

Long live India’s ambassador of colonial vehicular grandeur: for thou art big, safe and quite comfy!
Posted by MsTypo at 10:48 AM