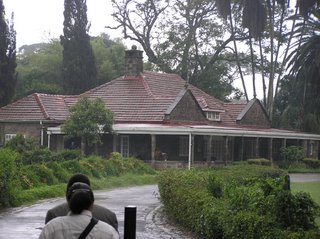 On our final day in Kenya, we headed out for some good old-fashioned sightseeing. Specifically, we arranged to see the Karen Blixen Museum and the nearby Giraffe Center. Do I really need to tell you which part of this trip will take up more blog space?

Ok, well to kick off our morning as tourists, we headed into the suburb of Nairobi called Karen. Named after Karen Blixen of “Out of Africa” fame, the area is quite picturesque and lushly green. If you have ever read Ms. Blixon’s book or seen the Meryle Streep movie then you’re ages ahead of Hubby and I on knowledge about this area and the woman for whom it has been dubbed. 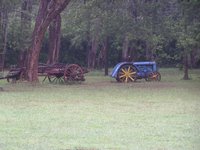 and substantial fortune on a coffee plantation. Her main reason for coming to Kenya was to marry her cousin who ended up dying in the 1930’s. She then hooked up with Robert Redford’s character who died in a plane crash (damn Karen was a serious Black Widow), watched her plantation go under, and then headed back home to Europe. I think that we all know that I’m missing lots of information here but you get the basic idea.

The one really cool thing about the museum is that it was actually her home. Some of the furniture in the house is original and the rest are set pieces from the movie. Tres cool. 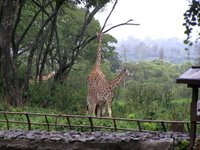 After our brief history lesson (that I so obviously paid attention to), we were off to the Giraffe sanctuary. This place was infinitely beyond cool. Set up as an education center and breeding ground, the Center’s main purpose is to save and repopulate the nearly extinct Rothschild Giraffe. 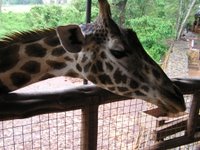 the poachers aren’t to blame this time. Go fig! The RCG (as I have dubbed it for short) was quite popular in Western Kenya. But when Man decided to move in town they nearly killed off the giraffes in their attempts at “civilizing” the area.

We were able to pet, feed, and learn about the snuggly critters firsthand with the help of a guide who made sure that I didn’t try to take any home. Meanie! One of the babies must have been a Canadian giraffe as his name was Gordon. Come on, you can’t get any more Canuckian then that! Of course, mean Hubby said that sweet little Gord wouldn’t fit in my carry-on baggage. 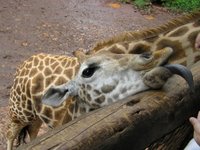 Hubby wanted me to note here that the giraffes had very long and scratchy tongues. He likened them to sandpaper more than once. He also thought they were very pretty even if he wasn’t going to let me bring any home.

In the pursuit of full disclosure and honesty, I should also note that Hubby did most of the feeding of the statuesque animals. I was slightly intimidated by their 14-inch long tongu 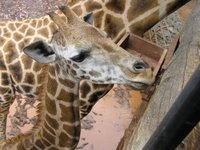 es and the propensity of one in particular to eat my fingers.

Overall, our final day in Nairobi was a grand success. We learned stuff about historical-type people, pet snuggle giraffes, and even bought some wine to bring home with us. The latter will last only a fraction as long as the former two, I’m sure.

Amiable dispatch and this mail helped me alot in my college assignement. Thanks you as your information.