Very often in the Real World, Hubby and I have made jokes at the expense of people who own and drive SUVs. These cars, we are told by their manufacturers, can survive and be used in rough terrains and be off roaded with ease. Reality, of course, is that the most arduous thing these cars will ever do is to drive over a speed bump or two in the wilds of the Big City mall.

As we prepared for our big move to India, we were mocked with these same jokes and tales of the Land Rover

or Hummer we would be given as transport in Delhi. Our rather comfy and smallish Honda City is no off-road ready monster. For while the challenge of negotiating traffic in Delhi is no small matter, we simply don’t need a Qualis or other such road monster. 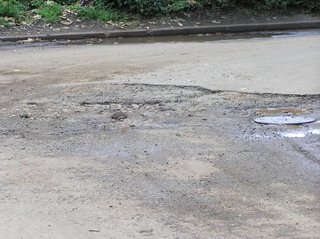 be said of Nairobi. We arrived in the midst of the rainy season and 1½ foot deep puddles on the road were not so much rare as the order of the day. The elephant-sized pot holes that spotted the road at every turn were also a fun challenge to negotiate. I know that there is a rumor out there that I am one given somewhat to hyperbole but this time I swear I kid thee not. These potholes would have given Baby Jessica flashback nightmares.

The one really weird thing, when compared with Delhi, was the complete and utter lack of motorcycles and scooters. Everyone here, it seemed, traveled by car, SUV 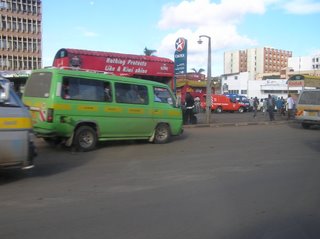 or Matatu (which is basically a shared taxi/minivan that is quite common here).

On our second night here, Hubby’s friend hosted a small dinner party for us and some Org newbies at his home in Karen. The ride there in Cowboy’s old-school Range Rover was an adventure and an education. At more than one juncture we were tipped precariously to one side as we drove around and through the potted roads. Take a wrong turn at a median? Not to worry – we literally drove over the median to get back on track.

So strap on your seatbelts and hold onto your assets because your beloved Delhi Typ0 is getting back behind the wheel. Yeehaw!
Posted by MsTypo at 9:40 AM