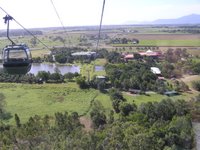 On Thursday, whilst Hubby toiled the day away hard at work at the conference, I elected to go touristing. This meant making my way to the local rainforest and the tourist village of Kuranda. The forest has existed since long before Cairns became such a popular tourist Mecca. But that hasn’t stopped the locals from making it a modern marvel of fun and picture taking.

We drove from the hotel toward the undulating hills that border Cairns. Drawing ever nearer to our destination, 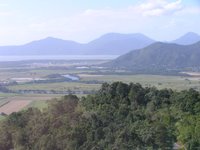 I wondered in a rather Canuckian way if skiing would have possible had their been snow on the ground. I looked again at the hills and laughed at my whimsy ‘cause only a good slalom skier would have been able to negotiate around those thickly treed knolls.

There are three ways up the mountain to Kuranda – car, train or SkyRail. The latter is an ingenious gondola ride up and over the rainforest canopy. 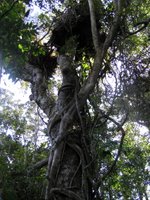 I had signed up to ascend on the SkyRail and come back on the train. A good idea I felt, as it would allow me to nap on the way home without fear of missing too much.

After a puzzling hour at the train station-ticketing counter, a group of us were shuttled to the SkyRail depot to begin our adventure. The smallish gondolas seat up to six people but the operators didn’t pack them up which allowed couples to ascend on their own. A sweet elderly couple (he from Tasmania or Tassie and she from Adelaide) saw that I was on my own and invited me to join them. 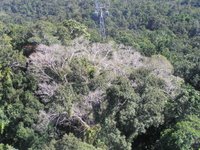 I learned during the first leg of the trip that the SkyRail had actually been privately built in the last decade or two. I forget exactly when but Tassie Guy claimed it was in the 80’s sometime. Or so he thought. Whoever did erect it did an amazing job. We climbed high and higher over the trees allowing us a bird’s eye view of both Cairns and the amazing eco-culture beneath us.

Unlike at Green Island the day before, Man and the local government (aka The Man) did interfere with the forest here to a certain degree. I spotted several trees that had been trimmed back to allow for the smooth passage of the SkyRail gondolas. Still others had inexplicably died into a beautiful silvery maze of braches. 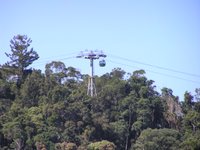 The ride up to the town of Kuranda was done in three separate states and took a good 45 minutes to an hour. At each junction, we were able to disembark from our gondola to explore the rainforest firsthand along guided paths. At the second stop, we were also able to get some rather nice pictures of the 300-meter high Barron Falls. Sadly, since this was not the rainy season we didn’t get a terribly roaring falls to view but it was still very pretty. It brought to mind the rather picturesque one we saw in Mauritius at Christmas. 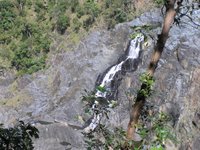 The nice couple opted not to join me for the final walk so I enjoyed a solitary ride up to Kuranda while sprawled across the gondola’s plastic seats.

Kuranda turned out to be a total tourist trap of a town – but in a good way. Small shops selling everything from boomerangs and didgeridoos (damn I love that word!) to magnets and opals dotted my path along the cobblestone streets. Eager tourists were flocking to these stores like bees to tchotchke heaven. 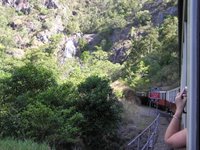 I was under strict instructions from the Aussie EC Crew™ not to buy anything. “No true Aussie would buy anything there,” I had been told rather sternly. I was one of the few people going home seemingly empty-handed. Yes, seemingly. I can hope that the Ladies will forgive me for, after an invigorating pint of cider I did buy a cute kanga-shaped magnet for the fridge. But nothing else - I swear!

A relaxing river cruise, Koala kidnapping… err… petting center, and butterfly sanctuary are all available once you arrive in Kuranda. I avoided the Koalas since I was due to visit a similar park in a few days with the Ladies. (*bounce*) All in all, I spent a rather relaxing day up there enjoying the typical and awesome Aussie hospitality. Plus, unlike the day before, I didn’t get seasick! 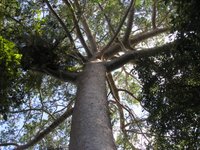 The ride down took a rather pleasant hour and a half, most of which I spent napping. I woke up long enough to see another waterfall and oogle a few Aussie tourists but that was it. I’ll say this for Cairns – everyone walks everywhere and it’s exhausting. I was more than ready for that fresh air nap as we headed back to town down the hills. I dreamt that I was a local Australian girl with my very own Koala for a pet and Kangaroo for transportation. *sigh*

PS with Irony: According to IMDB (the coolest place on the Internet), the rainforest depicted in the movie FernGully was actually based on rainforests here in Australia. Go fig!
Posted by MsTypo at 6:26 AM

Not even a opal?
The train ride reminds me of the one up (and down) White Horse Pass in Alaska but obviously no snow!
{I tried to paste in a picture of my train but it wouldn't work--think train picture, looking-out-window and snow}
Glad you're enjoying yourself,
merthyr