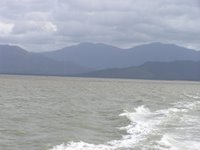 Wednesday was the day Hubby and I were due to be bound for the Great Barrier Reef. The day dawned darkly; clouds loomed over Cairns in ominous warning of what was to come. The rain and wind soon took up battle for which would ruin everyone’s day the most. Although the rains had ceased by the time we lined up to board our boat to the Reef, the wind had yet to cede the competition.

Poetry about the nastiness of the day aside, I have come to a new conclusion that I need to share with you, my Dedicated Readers. 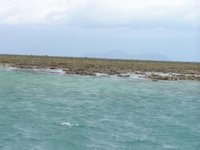 I no longer hate airplanes. I loathe and detest boats. I hate the way they pitch from side to side: the waves battering the sides of the ship, the ever present wind whispering just loudly enough to mock any thought you may have had of your stomach settling down for so much as a minute. I’m nauseas again just typing this.

It was with great relief on the part of everyone but Sea Legs Hubby that the boat docked at Green Island. The small island was made by nature over the last eon or so and adopted by the Aussie government over the last few decades or so as an eco-tourist trap. This pit stop along the Outer Barrier was our afternoon destination. 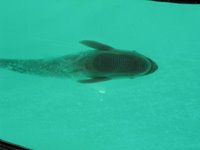 Due to the frigid water and the freezing air temperatures, Hubby and I skipped the chance to snorkel with the tropical fishes and catch pneumonia. Instead, we hopped aboard a glass-bottomed boat to view the fish from the comfort of a dry, wooden bench. Due to the incredibly low tides we were unable to see all that many fish. The suckerfish; however, really seemed to like Hubby as it kept clinging to the glass under his sandaled feet.

Not wanting to miss out entirely on the ocean experience, Hubby and I then made our way over the beach where the snorkelers were wishing that they had joined us rather than opting for goggles and flippers. After shucking our shoes on the beach Hubby managed to get out almost to knee deep when he realized that my tender tootsies weren’t up to the task of traversing the coral-lined sand that edged the water. Luckily his sense of gallantry was not put to the test as the skies suddenly opened up and began spitting on us. 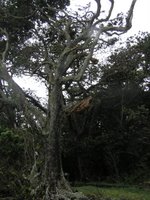 We wandered up toward the beach café and remained there only long enough to dry off and listen to an English woman flirt unsuccessfully with the Australian lifeguard who was lingering under the shelter.

This dreary day was, however, depressing Hubby so much that not even a plate of chips (fries) and gravy and a sausage roll could cheer him up. Seized by inspiration, and knowing that Hubby loves walking around somewhat aimlessly, I headed us in the direction of guided Eco-walk. [Hubby Edit: Please note that she did this only by accident] This wind-ridden tour took us around part of the island’s perimeter while we were told all sorts of cool factoids about the island and it came into being. 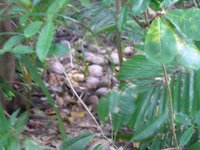 naturally. Whether they were seeds that floated there of their own accord or ones that arrived courtesy of one of the many birds (or rather, the bird’s digestive system) that called the Reef home, they all fought for space beneath the green canopy. Our guide explained that several plant varieties grew only during the monsoon season while others thrived during the drier weather.

The incredible variety of foliage the guide kept pointing out had me wishing that I had brought a notebook, or better yet, a waterproof tape recorder so that I could share his wisdom with you. One of tidbits I do remember is pretty cool, however, and has to with the coconut-like seeds that we kept seeing throughout our walk.

Although virtually inedible to humans, the Box Fruit is a useful thing to find when you’re starving on a deserted island. 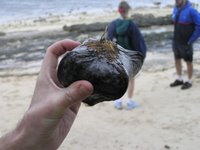 We were told that Aboriginals would use the unpalatable center of this seed to catch fish. They would spread it around in the shallow water where the fish swam and wait. The Box Fruit doesn’t kill the fish -- it simply and briefly de-oxygenates the water, stunning the fish temporarily. This allows the fisherdudes to select the victim they want, take it out of the water, and take it home to eat. The rest eventually shake off the effects and continue their daily swim. A perfect fish dinner without having to bait a hook. Cool, n’est ce pas? 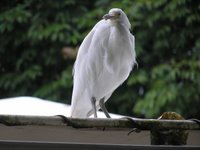 With a half hour to kill before we had to reboard the Boat From Hell, we elected to mosey along the boardwalk that bordered the island. This turned into a curious adventure as Hubby decided that he was an eight year old and spent the entire time making car sounds (VROOM!) and racing along (VROOM!) instead of simply walking. This was fine except when he continued to do it in front of other people who were somewhat confused by his actions. But I couldn’t blame them really since I have been equally as confused by him for at least the last eleven or so years.

All in all, I wish our wonderful day at the Great Barrier Reef had never ended. But that has more to do with the bumpy ride back more than anything else…
Posted by MsTypo at 4:35 AM

I thought that the weather was supposed to be nice all the time in Aussie?!
Try to have fun and enjoy the time away from Kenya-traz.
merthyr
latest info has been repled to.....