Pleased to Meet You 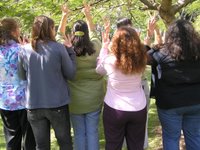 Our first Sunday in Gold Coast had finally arrived. Hubby may have flown all the way to Australia for a couple of stupid conferences but I was here for a completely different reason. I was going to finally get to meet some of the girls from EC Fans. Imagine if you will a young girl on Christmas morning excited to the point of bouncing around and squealing with anticipation at opening the gifts that Santa had brought. Well, that was me on Sunday morning.

I was waiting outside of our hotel for GirlyMum to arrive to pick me up. The plan was that we would drive to the nearby Cascade Gardens and meet up with the rest of the gang for a daylong picnic. I was slightly dubious that it would last all day as I was being picked up at 9:30 in the morning. I needn’t have worried, as I didn’t get home until almost dusk.

GM finally arrived with her two incredibly cute and well behaved daughters sitting in the backseat of her car. We awkwardly re-introduced ourselves using our real (aka non internet) names and hugged before heading off for the long three-minute drive to the Gardens. 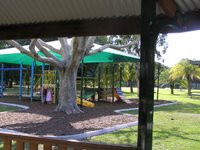 Surprisingly we were the first to arrive. With the help of GM’s daughters we snagged the last available picnic table and started setting out the feast that GM had brought to feed us all. After a few minutes, we noticed a young woman dressed all in black looking around the park and then rather dejectedly turning around to head back to the car park. After a few beats we both realized that this had to be Ace!

I ran over and rather embarrassedly asked the girl about to climb atop a black motorcycle, “Are you Ace?” I sincerely hoped I was right. She turned to me with a grin and a yes. After another round of intros and hugs she and I headed back over the to picnic table ‘o food. In case you were wondering the motorcycle dude was not her boyfriend as I had surmised, but rather her father. Oops!

About a half hour later our group grew yet again as Storm, Lois and Minnow all climbed out of Lois’ blue rental car. The bouncing, hugging, introductions and giggling started up for a third time as the early birds greeted our three newcomers. The EC Summer Meeting was officially underway. 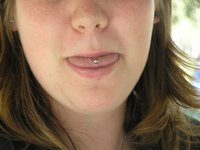 To honor the occasion, GM popped open (the first) bottle of bubbly and we toasted everything from Jean Auel (who we had to thank for brining us together) to friends who couldn’t be with us. Due to her new tongue stud, Ace decided to forgo the champers on the first round and joined the toast with some diet Coke. (Ok there was probably another reason she skipped the Champagne but this way I get to show a picture of her brand new tongue piercing! Tres cool!)

We must have terrified the poor old couple sitting at the table next to us as we joked about Jondalar’s many talents, Harley’s ego, my obsession with the world’s cutest animal: the Koala bear, and more. The poor dears finally left and we were finally able to really let go and be ourselves. That, I should point out, in my case meant being a good, demure and well-behaved young lady. No really, I am. I swear!

The day continued as we ate the once kidnapped Pavlova that Lois had saved from the clutches of an evil hotel maid. We also nibbled on cheese, crackers, chips, dips, incredibly yummy and addictive Cheesy-Mites and Tim Tams. GM had kindly provided enough food to feed the entire park of picnic-ers. Thank goodness we didn’t have to share with any of them!

For the most part we were good about calling each other by our real names but occasionally a Typ0, GM or minnow would slip out. This of course happened more frequently the more champagne we drank and the more sugary Pavlova we ate. We also tried to climb trees, run off the annoying stork-like birds who kept trying to eat our food, discuss why each of us was or wasn’t good at scrabble, and even snuck in a few minutes to write post cards to those people who couldn’t make it for the Meet. Despite the many hours we were there the day literally flew by. 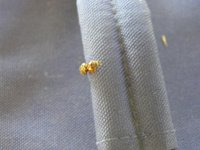 Evidently some of the local ladybugs got into the second bottle of champagne that GM opened. Naughty little buggies!

We even had a theme song for the day that the ladies kindly sang for me. It’s a real song and it’s called the Vegemite Song:

We're happy little Vegemites
As bright as bright can be.
We all enjoy our Vegemite
For breakfast, lunch, and tea.
Our mother says we're growing stronger every single week.
Because we love our Vegemite.
We all adore our Vegemite.
It puts a rose in every cheek!

And people call me weird… 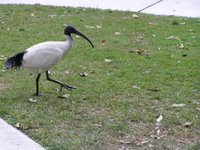 I could honestly go on for pages and pages about everything we talked about and my very favorable impressions of these amazing ladies. This day of giggling, laughing and making friends was the single best part of my entire trip to Australia. From now on whenever I think of “The Land Down Under” I won’t be humming a song by Men at Work (ok maybe a little), I’ll be smiling and reflecting back on a perfect day spent with five other wonderful women and the memories we made together.

Stop bragging, you! I wanted to be there!

No orange juice for the champers?
All of you certainly seem to have had a great day---glad the trip went well!
merthyr