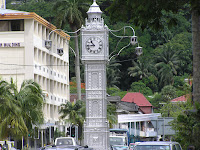 Due to Hubby’s crispy-style shoulders, we opted to go driving around Mahé on Boxing Day. A simple sounding plan perhaps but despite having only 100 taxis on the island there are no major car rental places to pick up the slack. After a bit of negotiating with our hotel, we managed to arrange for a slightly over priced (and empty-tanked) sedan for the day. Our plan was to spend the morning and lunch in the capital “city” of Victoria and then to drive the perimeter of the island stopping at various touristy spots that were mentioned in the guidebooks. 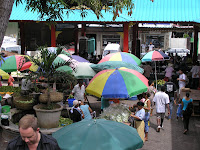 The POA set, we made our way 10 minutes down the road to Victoria. There isn’t much to see in the capital and the tourist shops are lacking in anything that even I, the original shopaholic, wouldn’t buy. The main two things to see in town are the clock tower (which didn’t work until 2000 as the movers dropped one of the pieces into the salt water back when it arrived in 1903) and the fish market. The latter was a source of good deals on whole nutmeg (for me) and dried lemongrass (for Hubby’s tea). 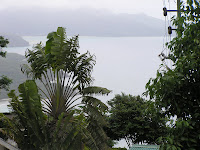 After a decent but rather bland lunch at the “famous” Pirate’s Cove we piled back into the car and, map in hand, set out on our tour of Mahé. I should note here that the entire island is rather hilly and Hubby’s ability to negotiate the inclines while shifting gears was greatly put to the test. Despite the once-award winning skills of Map Girl (aka me), we managed a few wrong turns on an island with only a handful of main roads.

The plus side of this was that the scenery made all the poor navigation worthwhile. The narrow roads (two lane my arse!) made it difficult to impossible to pull over for pictures much of the time but Hubby’s old lady-esque driving enabled us to enjoy the beauty of the Seychelles at a leisurely pace. The vistas around us were genuinely gorgeous and made the hours that day literally melt away. 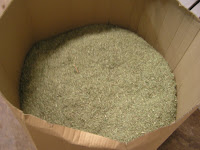 After a brief shop at the Seychelles’ version of Fragonard, Creole Fleurage Parfum, we went back up into the hills for what we hoped would be another tea plantation tour. We realize that the tea tour has become a rather predictable part of our trips but we love drinking the free tea and buying discounted Citronelle tea straight from the source. Of course neither of these was possible at this plantation because we arrived too late in the day and the Evil Woman in the store refused to sell us any of Citronelle tea because it required her to stop talking on her cell phone for more than five seconds. (The Itch!)

We then headed back down the “mountain" in search of the local outdoor craft center. Once again my amazing map reading skills led us to a road famous for being the worst on the island. Or as I liked to call it “a short cut.” The good news is that, as I mentioned, there aren’t that many roads on Mahé so you can’t actually get lost even if you try.

The skies opened up just as we arrived at the craft village and didn’t ease up until early evening. We took advantage of this easing of the seasonal weather to escape back to Beau Vallon for a restaurant that all our guidebooks swore was a top pick. For the record: they lied. The Boat House was described as a seafood buffet but was more of a tuna buffet. *shudderblech* 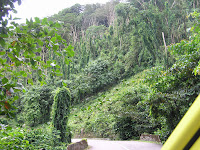 There were only two high points to the entire fetid meal; the first of which was the coconut couscous that turned out to be a local specialty. Coconuts, as you may recall, are plentiful here and the locals have discovered numerous yummy ways to use them: from fermenting them into potent rums to using the meat to season a normally boring dish and transform it into a memorable meal.

In case you’re wondering what the second high point of the meal was… It was paying the bill (where we did actually fare well with the Euro exchange rate) and getting to leave.

Just as we pulled into the Wharf, it began to pour once again only this time it didn’t let up until long after we were asleep. This, as I was soon to discover, was a bad omen for our boat trip to La Digue and Praslin the next day. A very bad omen.
Posted by MsTypo at 2:25 AM