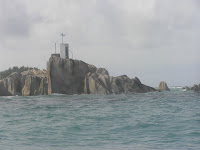 Wednesday was a day I would much, much, much rather forget for the rest of my life. Wednesday, you see, was the day that we took a boat ride from Mahé to La Digue and then onto Praslin and back home to Mahé. Or, as I remember it, the day I discovered that I was *not* a pirate or any other sort of sea faring person in a previous life. Allowing for some pleasurable stops in between, the torturous sojourns aboard the ship overshadowed the rest of the day…

As I mentioned in my previous blog, the rainy season was upon us in the Seychelles when we arrived on Christmas Eve. Typically, though, the rain comes in short, sweet bursts, so the rain we experienced yesterday was a bit unusual. The rain that had amused us the night before with its fork lightning had created rough seas by the next morning. This naturally coincided with our planned tour to the islands of Praslin and La Digue. 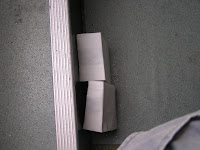 Praslin and La Digue are the second and third largest islands of the Seychelles after Mahé and are approximately 20 minutes away via helicopter or an hour and half away by boat. A very long hour and half.

Our tour consisted of about 30 people in total; about 12 of whom were seasick on the way to La Digue that morning. Sadly and pukingly, I was one of them. I am proud to say that I held out for about 45 minutes before I reached for my first little white bag. Although my practice of not eating breakfast probably contributed to that bit of will power. 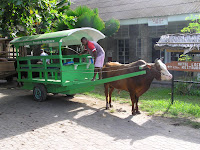 When we finally arrived on La Digue everyone gladly ran off the boat and started to look around the small island which had only had motorized transportation for about 10 to 15 years. Prior to the introduction of this modern convenience, locals used ox pulled carts to get around. Of course, since ox pulled carts are kitsch and cute, they naturally kept them around to transport sea weary tourists like us.

The first stop here was a touristy coconut plantation where we learned about the big money to be made with this small male fruit. We were told that vanilla production 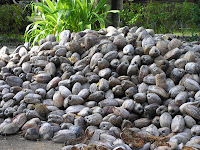 used to be the number one industry but the abolition of slavery did away that labour intensive crop. The answer for the lazy plantation owners fell as if from the sky: coconuts. All they had to do was wait until nature said they were ripe and they fell from the trees, pick them up and enjoy their harvest. The perfect crop for lazy rich folks.

Much of the Seychellois production stock is shipped to Pakistan after firing (which preserves the meat of the fruit) where it is used to make everything from oil to butter. But nothing here goes to waste: the coconut water is consumed by the animals and the discarded shells are used to heat the kilns that fire the coconuts after harvest. 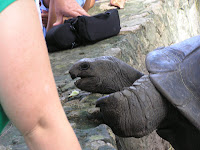 The tour guide introduced the group to the Emmanuelle house and then moved the oblivious (other than us) group onto the turtle pen. These massive ninjas-in-waiting are native to the island and were absolutely adorable. A few them even ate from the hands of one of the braver tour-goers.

Lucky for my still wobbly stomach, our morning on La Digue included a several hour rest on a lovely beach with an even lovelier cool breeze. We once again coated our skin with SPF50 and then plunked ourselves on a shady rock to enjoy the sight of our fellow tourists in their tanned, bikinied and Speedo-ed splendor. *shudder* 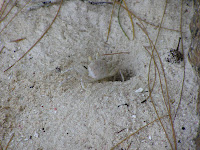 We spent quite a bit of time on the beach tormenting the sea crabs that seemed to jump at every sound, shadow, or stick that Hubby threw at them. The Crab People eventually became braver and inched closer to us; this resulted in Hubby experimenting in covering their house holes to see who would win Strong Man Crab Edition when the need to escape their seed covered homes arose.

Sadly, this land-locked peace was not long lived: we were told to head back to the boat so that we could head over to Praslin. You can, I’m sure, imagine how brilliantly happy I was with this news. On the plus side, at least this trip would last only 20 minutes. Twenty very long minutes. 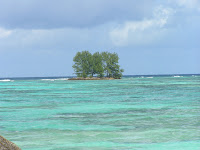 The first stop after the horrible boat ride was a small forest. This incredibly informative walking tour was where we learned all about the famous Coco du Mer and its slightly less sexy male counterpart the coconut. Our guide pointed out other cool trees like All Spice (which I always thought was some sort of white trash mix of several other spices as opposed to one big tree) and Breadfruit trees. Cool note about the latter is that instead of being buried in coffins made of pine, the Seychellois make their coffins from the wood of the breadfruit tree. Which, of course, means that they aren’t buried in pine boxes; they are buried in breadboxes!! LOL I amuse myself. (Yes, that was your cue to laugh and agree that I’m funny.) 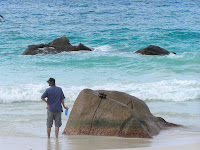 Lunch, which for my queasy stomach consisted of a piece of bread and a scoop of rice, was followed by more beach time. Despite the light sprinkling of rain, most people, including Hubby, went straight out into the azure blue water to splash around. This hour was only to fool us into thinking that our moments in paradise would never end. The call to board the boat back to Mahé proved that sentiment wrong.

The trip home was pretty much the worst hour and half of my life ever. I didn’t just regurgitate lunch but I think I felt several intestines make their way into the small 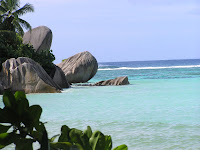 white bags that the boat crew kindly tossed overboard for me. In fact I kept one only slightly mocking crewman busy the entire time with that rather repetitive job.

I officially hate boats, sailing, and anything having to do with the water in general. The worst part was that we had another boat tour planned for the next day. God help me because as we docked in Mahé the thought of getting in a bus was making my stomach quake. Boarding a boat in less than 12 hours sounded about as thrilling as dinner at the Boat House. Poseidon help me!
Posted by MsTypo at 3:07 AM

Praslin looks tiny in the picture (just kidding!). Nice photos. Sounds like you are going to have to take helicopter rides next time. Definitely better than the ice storm here.
merthyrmum

"As I mentioned in my previous blog..."

I've read a lot of blogs but apart from here, I have not come across this usage of the word. The word 'blog' is referred to the entire online diary. It is slightly annoying to see it referred to a previous entry. I know you've always used it this way but that doesn't make it right.

The above sentence should be: "As I previously blogged..."