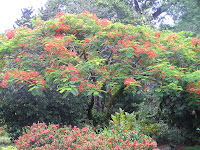 Despite previously made plans to attend a tour of Île aux Cerfs, the tour operators kindly gave one day away from boats and water to spend as land-locked as possible. The horror of boating would return full force on Friday but at least for this one day, I could attempt to forget that the only way to visit the neighboring islands was by ship.

The first top on our Day Away From Water Tour was a fabulous pizza place in Victoria called Sam’s. Due to our remarkably late start to the day, the restaurant had actually stopped serving lunch by the time we arrived. After a few pitiful looks and pleadings on our part, they took pity on us and agreed to let us be the absolute last seating of the afternoon. Our extra pathetic looks were not for naught, for lunch, as promised by the guidebook, was trés tasty. 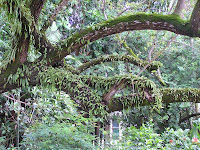 Properly satiated with rum punch and pizza (Hold on. That sounds oddly familiar…) we headed “a wee bit” down the road to the Botanical Gardens. Three miles later, we were granted access the incredibly picturesque grounds free of charge due the late hour. Here, rather than the typical slather of sunscreen we applied a coat (or six) of mosquito repellent.

It should be noted at this juncture that whilst Hubby was sunburned from our holiday, I spent the whole week as a walking 12-course mosquito meal. Bitten from ankle to cheekbone, I spent more time rubbing my back against itch easing doorways than can be considered either reasonable or polite. The Botanical Gardens are a known ‘skeeter hangout and I was not going to be caught out (like I had on every other day of our vacation). That said, it was here that I obtained my highly attractive cheekbone bite. Lucky, tasty me! Or something… 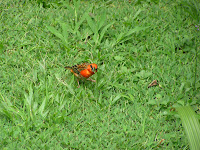 Bloodsuckers aside, the gardens were gorgeous. They boasted all sorts of local flora and fauna including several varieties that we were unable to identify. Although free of wildlife of the four-legged variety there was an abundance of birds to enjoy. There were several amateur ornithologists there with us who seemed thrilled every time an overhead branch so much as quivered. 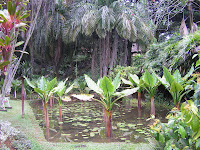 Then, of course, there was the wildlife of the two-legged variety that were busy throwing a rather loud party in the covered café at the top of the swampy portion of the park. Luckily, they didn’t inhibit our enjoyment of the area and even helped to provide a groovy soundtrack to our afternoon. The birders were a little less impressed as the music seemed to have scared away several varieties of birds that were known to call the Gardens home.

Dinner that evening was at La Scala near Beau Vallon. Restaurants in the Seychelles come in two varieties: inexpensive and inedible; and expensive and exquisite. La Scala was definitely part of the latter grouping. This was one of those places where women receive a 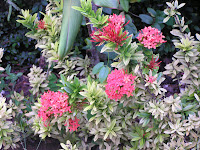 menu devoid of prices so that their dates can faint away when they innocently order veal or lobster not realizing the wallet-shocking price. The homemade pasta melts in your mouth but leaves you with just enough room for one of the devilishly delightful desserts. The best part of an evening at La Scala, should you ever find yourself there, is the view of the waves crashing against the shore in the fading light.

As our rather cool taxi driver drove us home we snuggled together and I tried to forget the horrors that would be waiting for me come the dawn. Hubby insisted that the catamaran would be gentler on my landlubber stomach than yesterday’s wave hopping vessel. In the meantime, I was more than willing to fall into our bed and dream of having teleportation skills that would never require me to board a boat ever again.
Posted by MsTypo at 8:24 AM

It seems that the Canadian mosqui "wipes" need replacing! But the gardens look gorgeous.
merthyrmum