Seashells in the Seychelles 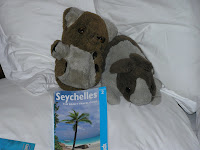 As I mentioned in my previous post, Hubby and I spent the week of Christmas in the Seychelles and it was heavenly…

Christmas Eve morning arrived sooner than I had either wanted or expected. Before I knew it, Hubby was creaking down the spiral stairs and calling out that our taxi to the airport would arrive in twenty minutes. My first thoughts were about how much I hated mornings, morning people, anything in general that required me to awake before at least 8:30 a.m. That, of course, is when I remembered that it was finally the day of the trip! Agreeing to wake up early today meant that I got to go to the Seychelles. With that sunny thought in mind, I crawled out of bed with something that vaguely resembled enthusiasm. Or at least with as much enthusiasm as I could muster two hours before dawn.

One of the nice things about this destination choice for the holidays is that the Seychelles is only three hours away from Nairobi by air. If you inclined to look it up in your atlas, the 115 islands that make up the Seychelles are located in the Indian Ocean vaguely near Madagascar. To continue on the nerdy info-theme, the total landmass of the islands is less than 460 square kilometers. To put that into perspective, Hubby and I drove the perimeter of the main island of Mahé and crisscrossed it three or four times all in about a half a day. (And it only took that long because, as you know, darling Hubby drives like and old woman.) But more about that day of driving and puttering around on another episode of Blog.

We arrived in Mahé with little fanfare (and only slightly late due to flight delays) and made our way to our hotel, the Wharf. The hotel and private marina were well maintained if somewhat out of the way from the rest of the island and its attractions. That said, our room was brilliantly air conditioned (to the point of being chilly), generously sized, and had a rain shower. (Dude!!) Naturally, since this is us we’re talking about there was no hot water in said rain shower but the excessive heat and humidity made hot water a rather torturous thought most days. 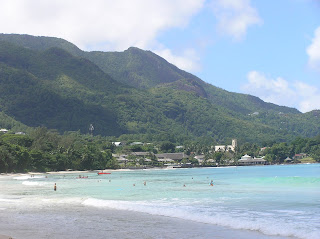 We settled into our room and headed down to the bar (Shocking huh?) where we eased ourselves into Seychellois life by sipping beer and margaritas. A light lunch was interrupted only by requests for more beverages and the need to reserve a table for the “gala” dinner that was planned for that evening.

The surprisingly good dinner of soup, turkey with all the trimmings, and dessert was marred only by the dreadful humidity that hung in the air. Because of said heat the cold amuse bouche and lemongrass sorbet courses were among everyone’s favorites. That said, even Hubby who is by no means a huge turkey fan, loved the dinner and was still raving about it several days later.

It was with slightly intoxicated heads (induced by locally made after-dinner liqueurs) and full stomachs that we ended our first day on the island of Mahé in the Seychelles. We crowded under the warm, white duvet and closed our eyes content in the knowledge that we had been good little expats this year and so Santa was sure to visit us during the night.

That’s when it happened. 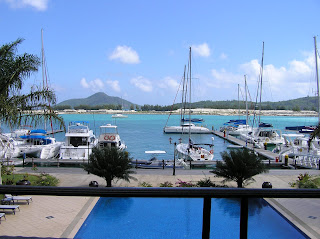 All of a sudden (around 3 or 4 a.m.) there arose such a clatter that I sprang from my pillow and told Hubby to answer the dang phone! The urgent life or death event on the end? It was my beloved parents calling to wish us a happy Christmas.

Let this be a lesson to you children of the world who, like me, enjoy tormenting their parents by calling them on every holiday in the middle of the night. Payback will come and it will be vicious and mocking and said previously besieged parents will enjoy waking you from your innocent and peaceful slumber.

You think you'll have the last laugh...not a chance! However, your dad's birthday is up-coming. Perhaps we'll unhook the phone?
merthyrmum