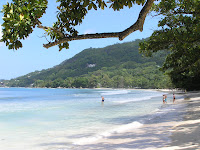 Our early pre-morning wake-up call not withstanding, our first night’s sleep in the Seychelles was a peaceful one and we awoke to a sun drenched Christmas morning. After rifling through all the goodies that Santa had left for us we prepared for a traditional Seychellois Christmas on the beach.

A light continental breakfast later, Hubby and I piled into a taxi and headed for Beau Vallon in the north part of the island. Beau Vallon is a great hub of people, hotels, and restaurants and is probably the area we would stay on our next visit. All the beaches in the Seychelles are essentially public and don’t belong to any one hotel no matter their proximity to the key sunning spots. This in mind, we wandered down the beach and found a nicely shaded spot only a few feet from the salty ocean. Hubby kindly snuck into the closest hotel and procured a chaise lounge for me to perch upon. 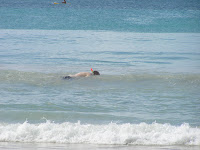 Our first order of business was to slather SPF 30 sunscreen all over our carefully cultivated pasty selves. As we did so we looked around at the highly tanned (and often burned) Europeans lying on the sunny beach around us. While it is highly probable that we simply missed it, it appeared that we were some of the only people on the beach who concerned themselves with sunscreen application of any kind. Our fresh arrival on the island was highlighted whenever bare-chested Hubby would stand near anyone else and his neon whiteness shone like a healthfully pale beacon.

One last comment on the sunburned Europeans… When Hubby and I rule the world there will be an official embargo on Speedos. *shudder* Good god, why do fat 50 year olds think they look sexy in a tiny piece of material that does NOT cover their boys. *shudder*

Back to the blog… Suitably attired in surf shorts and plenty of sunscreen, Hubby ran directly for the water while I settled onto my chaise lounge and started to Soduku. After having whizzed through several “difficult” puzzles, I joined Hubby in the water and was rewarded for this marital devotion by being dunked under the warm salty water several times. 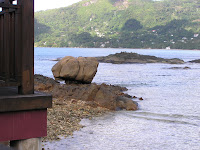 Hubby spent more time playing in the waves in Beau Vallon than he spent on shore and it was only with some reluctance that he finally joined me on the beach and got dressed for dinner. It was then that I noticed the somewhat pinkish colour on his shoulders. I dismissed this rose coloured vision since I knew we had almost emptied the bottle of sunscreen that day with multiple applications.

We wandered down the beach to the Le Meriden Hotel for dinner. We had read in our guidebooks that this rather pricey hotel had good restaurants (and bars as we soon discovered) and made reservations quickly. The maitre-d’ seemed less than pleased to hear that non-hotel-residents were trying to eat in his restaurant but we smiled innocently and bid him a Joyeux Noël. (I mentioned that the Seychelles is a French/Creole speaking country, right?) Our dinner that night, while not free, was very tasty. 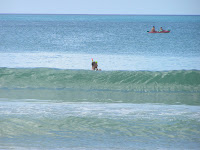 After an incredible thirty-minute wait for a taxi back to our hotel (about 20 minutes away) we finally arrived back to our hotel home away from home. It was there that we discovered that Hubby’s “pink” shoulders were actually lobster red as was much of the top of his back. It turned out that the sunscreen we were using wasn’t actually waterproof (despite its claims on the label: damn boutique-y brands!) and every time he went back into the water he washed off his protection. The funniest part (if I may admit there was a funny part) was that the redness ended right along the water line where he would stand-up to wave at me. I should admit here that I too was slightly pink along my nose and cheeks despite having applied sunscreen vigorously all day. We quickly agreed to start using the SPF 50 the next day.

Of course, if we were burned and we actually tried to protect ourselves what did those Europeans who purposely placed themselves directly in the sun’s rays without sunscreen look like?! Great! Next time we went to the beach we’d have to deal with lobsters wearing Speedos. If that thought doesn’t give you nightmares then I don’t know what will. *shudder*
Posted by MsTypo at 2:22 AM