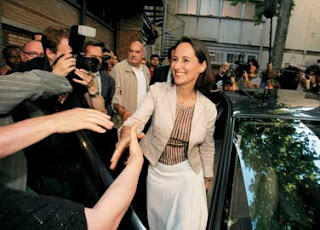 Today’s blog is for our Devoted Male Readers, especially those back home in Illinois. Hubby, as many of you may know, has freakishly weird taste in women. Other than choosing the best thing that ever happened to him (Moi!), he often goes for women that most people think are less appealing. Examples through the ages include Julianne Moore, Liz Phair, and Fionnuala Sweeney (pre-bad hair, of course!).

(To keep our buddies back home honest, I thought I’d include a few of their weirder cougars of choice: Hilary Clinton, Diane Lane, and Madonna. I’m not naming names because you know who you are!)

Which brings us to the debate that began this past weekend while watching coverage of the French elections. Is Ségolène Royal hot? Hubby believes that this fifty year old is hot enough to be worthy of his vote in the elections, if only it weren’t for her crazy socialist platform to which he has extremely strong objections. I believe that he’s just plain crazy.

But our thoughts and beliefs don’t count for much without someone else to reassure us that we’re on the right track. So what do you guys think? Is Hubby yet again off his rocker with this Royal crush?
Posted by MsTypo at 1:33 AM

She isn't drop dead gorgeous but she's no bagger either. Sorry S