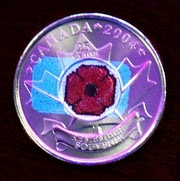 It’s possible that this may be one of the saddest chapters in Canadian/American diplomacy. Of course it is also highly possible that any American in a position to do so will deny that the events that lead up to this post (and to the article below) ever happened. You see, several months ago, the US accused Canada of espionage via pocket change. Oh yeah, you read that right: pocket change. Don’t worry it gets better.

It turns out that this nefarious pocket change was actually just a quarter –a twenty-five cent coin – with a poppy in the middle that the Canadian Mint had put out in honour of Remembrance Day. The idiot Army contractors even put the evil quarter under a high-powered microscope to discover just what new technology the vile Canucks had come up with.

The contractors in question said that their coat pockets had been empty in the morning and then they found the mysterious coins in their pockets later in the day. They described the evil quarters as “anomalous” and “filled with something man-made that looked like nano-technology.” For those of you who haven’t seen a quarter or a poppy this is entirely possible – for a two year old hyped up on sugar and Ritalin.

I’ll let you read the article and form your own opinions. Either way, I thought that this one was way too funny not to share.

(I just hope that those contractors didn’t notice the highly suspicious looking local animals during their stays. They could have found out about our trained Kung-Fu Polar Bears or Evil Undercover Spy Puffins that form the vital backbone of Canada’s national defense. Shhhhh!)

WASHINGTON - An odd-looking Canadian coin with a bright red flower was the culprit behind a U.S. Defense Department false espionage warning earlier this year about mysterious coin-like objects with radio frequency transmitters, The Associated Press has learned.

The harmless "poppy coin" was so unfamiliar to suspicious U.S. Army contractors traveling in Canada that they filed confidential espionage accounts about them. The worried contractors described the coins as "anomalous" and "filled with something man-made that looked like nano-technology," according to once-classified U.S. government reports and e-mails obtained by the AP.

The silver-colored 25-cent piece features the red image of a poppy — Canada's flower of remembrance — inlaid over a maple leaf. The unorthodox quarter is identical to the coins pictured and described as suspicious in the contractors' accounts.

The supposed nano-technology actually was a conventional protective coating the Royal Canadian Mint applied to prevent the poppy's red color from rubbing off. The mint produced nearly 30 million such quarters in 2004 commemorating Canada's 117,000 war dead.

"It did not appear to be electronic (analog) in nature or have a power source," wrote one U.S. contractor, who discovered the coin in the cup holder of a rental car. "Under high power microscope, it appeared to be complex consisting of several layers of clear, but different material, with a wire like mesh suspended on top."

The confidential accounts led to a sensational warning from the Defense Security Service, an agency of the Defense Department, that mysterious coins with radio frequency transmitters were found planted on U.S. contractors with classified security clearances on at least three separate occasions between October 2005 and January 2006 as the contractors traveled through Canada.

But the Defense Department subsequently acknowledged that it could never substantiate the espionage alarm that it had put out and launched the internal review that turned up the true nature of the mysterious coin.

Meanwhile, in Canada, senior intelligence officials expressed annoyance with the American spy-coin warnings as they tried to learn more about the oddball claims.

"That story about Canadians planting coins in the pockets of defense contractors will not go away," Luc Portelance, now deputy director for the Canadian Security Intelligence Service, wrote in a January e-mail to a subordinate. "Could someone tell me more? Where do we stand and what's the story on this?"

Others in Canada's spy service also were searching for answers. "We would be very interested in any more detail you may have on the validity of the comment related to the use of Canadian coins in this manner," another intelligence official wrote in an e-mail. "If it is accurate, are they talking industrial or state espionage? If the latter, who?" The identity of the e-mail's recipient was censored.

Intelligence and technology experts were flabbergasted over the warning when it was first publicized earlier this year. The warning suggested that such transmitters could be used surreptitiously to track the movements of people carrying the coins.

"I thought the whole thing was preposterous, to think you could tag an individual with a coin and think they wouldn't give it away or spend it," said H. Keith Melton, a leading intelligence historian.

But Melton said the Army contractors properly reported their suspicions. "You want contractors or any government personnel to report anything suspicious," he said. "You can't have the potential target evaluating whether this was an organized attack or a fluke."

The Defense Security Service disavowed its warning about spy coins after an international furor, but until now it has never disclosed the details behind the embarrassing episode. The U.S. said it never substantiated the contractors' claims and performed an internal review to determine how the false information was included in a 29-page published report about espionage concerns.

The Defense Security Service never examined the suspicious coins, spokeswoman Cindy McGovern said. "We know where we made the mistake," she said. "The information wasn't properly vetted. While these coins aroused suspicion, there ultimately was nothing there."

A numismatist consulted by the AP, Dennis Pike of Canadian Coin & Currency near Toronto, quickly matched a grainy image and physical descriptions of the suspect coins in the contractors' confidential accounts to the 25-cent poppy piece.

"It's not uncommon at all," Pike said. He added that the coin's protective coating glows peculiarly under ultraviolet light. "That may have been a little bit suspicious," he said.

Some of the U.S. documents the AP obtained were classified "Secret/Noforn," meaning they were never supposed to be viewed by foreigners, even America's closest allies. The government censored parts of the files, citing national security reasons, before turning over copies under the U.S. Freedom of Information Act.

Nothing in the documents — except the reference to nanotechnology — explained how the contractors' accounts evolved into a full-blown warning about spy coins with radio frequency transmitters. Many passages were censored, including the names of contractors and details about where they worked and their projects.

But there were indications the accounts should have been taken lightly. Next to one blacked-out sentence was this warning: "This has not been confirmed as of yet."

The Canadian intelligence documents, which also were censored, were turned over to the AP for $5 under that country's Access to Information Act. Canada cited rules for protecting against subversive or hostile activities to explain why it censored the papers.