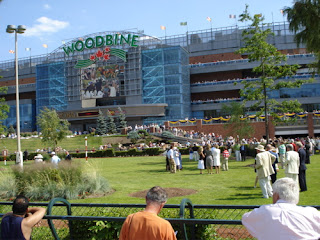 Later this week I’ll tell you guys about the wonderful people I was able to hook up with in Toronto. I may even tell you about all the shopping I did – both the window (literally) and clothing varieties. But first, I wanted to tell you about the awesome day I spent winning money.

My parents are avid horse racing fans – some of you may remember that my father goes every May to watch the Kentucky Derby live and in person. As luck would have it, a race known as the Queen’s Plate was being run in Toronto around week two of my trip. Some of you may be worrying at this point since it isn’t exactly a secret that I have an addictive personality (Martini, anyone?) and probably shouldn’t be gambling without close Hubby-supervision. Well, stop worrying and reread the first paragraph – I made money, baby!

But I’m getting ahead of myself… 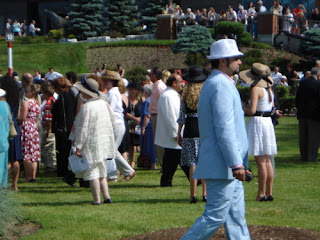 The ‘Rents and I made our way to Woodbine racetrack and parked as far as humanly possible from the front door. Before we could bet on any races, my mother had to explain how to read the racing form/booklet I had been given at the door. I evaluated her advice and weighed it with my own careful research before betting on horses whose names sounded the best. I headed over to the betting window and bet $5.00 each on various horses to win (first), place (first or second), or show (first, second, or third).

The seats we had gave us a wonderful (and wonderfully shaded) view of the finish line. My first ever, live race ended with me winning - absolutely nothing. Over the course of the next few several races I managed to bet a total of sixty or seventy dollars while winning only about ten or twenty. I was obviously in the zone… the losing one, that is.

Immediately after race number eight, the three of us placed our bets on the Big race – the Queen’s Plate. The horse I wanted to bet on had been scratched (withdrawn) so I quickly chose another one at random. From the betting windows we head out to watch the parade. 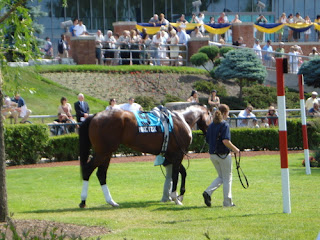 The parade is a pre-race opportunity to see the horses and their jockeys up-close. The real competition at the parade appeared to be among the owners who strutted and peacocked around as if they were the ones who were about to run rather the pricey investments behind them. That’s when I saw horse number nine and it’s pretty aqua horse blanket. I wish I could tell you that I looked into that horse’s eyes and saw something but the truth of the matter is that the horse was pretty and I liked the colour of its silks.

Team Typ0 rushed back to our seats so that we wouldn’t miss a moment of the race. While the ‘Rents got comfy I stopped off at the betting window to place $5 on #9 to win and, as a hedge, another $5 to show. Shortly after I got settled into my seat, the race began and everyone was cheering on for their horse to go faster, stay in the race, and win them some money. That’s when I noticed #9 edging up to the front of the pack. I joined the screaming masses encouraging my horse to be a leader and pull ahead. 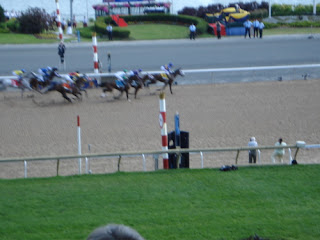 It was a clear win!! Horse #9 (whose name I really wish I could remember) and his jockey won one for the history books - the jockey was the first woman to ever ride to first in Plate history. As for me, it was a double win since I had believed in my horse enough to bet on it twice! My final haul was almost $100. Quite the return on my $10 investment, eh? Not including my entrance ticket (which my parent’s had paid for) I ended my day $30 up.

My time at the Queen’s Plate was a winning trend that would continue throughout my gambling-themed vacation. I may not have had a complicated system, or even basic knowledge about what I was doing, but I had proven that a little naivety could go a long way. Including the bar where, that night, drinks were on me!
Posted by MsTypo at 5:58 AM

Wow, I only had to post 2 anonymous post to get a response. Now I am happy that I can finally find out what my favorite canuk has been up to!! Mary

Thinking of the name....not coming up with anything yet but will keep trying...
merthyrmum