Shockingly, I spent most of Home Leave eating. And since I don’t believe in discriminating, I ate everything in sight! No burger, piece of sushi, or salad was safe from my Real World cravings. I also didn’t believe in eating on a budget so we hit everywhere from Harvey’s and Qdoba to Mario Batali’s new restaurant and even the Olive Garden! 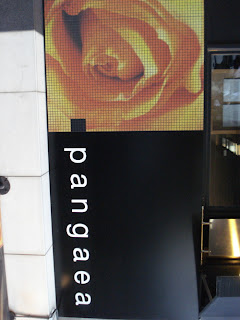 Whilst in Toronto, we celebrated my parents’ 40th wedding anniversary and my brother BBS’s zillionth birthday. Sadly, he wasn’t there to celebrate with us but we still drank in his honour because, as you know, we need excuses like that to drink in my family. The location of the festivities was a Yorkville restaurant called Pangaea.

The venue’s name was amusing if only because just days before we made the reservations, I had been explaining my favourite “continental drift puzzle game” to my family over dinner. Yes, I’m a geek but that doesn’t make the game any less fun!

Although our next big meal didn’t include caribou (which Hubby greatly enjoyed), we still had a great meal at Mario Batali’s Las Vegas restaurant B&B. By this point, we had heard to expect little to nothing of any celebrity chef restaurant in Vegas. But since this dining experience was part of the reason we were staying at the Venetian, I wasn’t going to let bad press dim my enthusiasm. 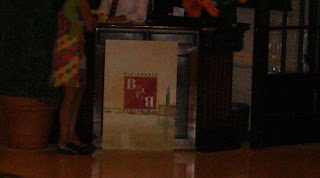 The first big plus was that unlike many celebrity ventures, B&B was relatively small. This, naturally, meant that the tables were a wee bit too close together for my liking but that was only a half-star deduction. Unlike other similarly priced Vegas restaurants (*cough* Picasso *cough*), we were permitted to dine at our own pace and the courses were very nicely spaced out.

Our meals, while taken from Mario’s various cookbooks, were great if not highly memorable. The knowledgeable wait staff was able to advise us on wine pairings and even which dishes they felt were “winners.” Wine-wise; however, we did extremely well – from the champagne cocktails we started with to the gloriously lovely Muscat we ended the meal with. The Muscat was so nice that even I had a glass of the slightly sweet dessert wine!

These fine and pricey restaurants were lovely but our truly great “dining” choice of the trip was our dinner at Casa Bonita. Those of you who are fans of “South Park” will recognize the name from the season seven episode “Casa Bonita.” You may not have realized this was a real place but it is – complete with cliff divers, Bad Bart and the relatively bland “Mexican" food. 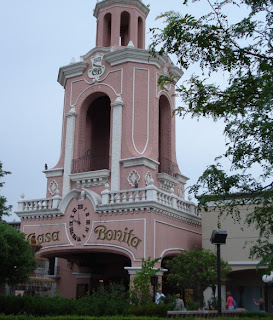 I wish we had nicer things to say about Casa Bonita, but the two hour wait to order, pick up our food cafeteria style, and then finally find a seat, only to eat bland food was less than thrilling. Don’t get me wrong, I’m ecstatic that we experienced Cartman’s dream – but we’re not heading back any time soon.

Our final “destination” meal was in San Diego. The Corvette Diner is one of my favourite restaurants for several reasons not the least of which is that I enjoy having sassy waitresses throw straws in my face and tell me to hurry up because they have better things to do. Obviously, the diner is an acquired taste and popular with families, but the food is good and the milk shakes are great. 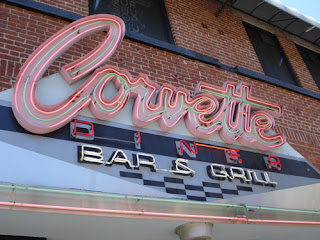 The downside to this fun venue is all the families who think that sassy waitresses are a good way to occupy their otherwise un-parented brats. We witnessed several children being downright belligerent to one waitress while the parents watched on and said nothing. Wait-chick finally stood-up for herself and told the children and parents off after the kids had thrown one too many napkins and straws (purloined from various other tables) at her. We applauded her and added extra money to our tip as a monetary high-five.

In between these adventures in eating, we ate lots of great home cooking with my parents, fast food in Illinois, tapas in Portland, and cider and beer everywhere else. It’s weird but as much as I love dining out in restaurants, and we all know I do, I was happy to get back to Nairobi and yummy, healthy home cooking Typ0 and Hubby style. That said, we’re going out to dinner tonight – and that’s good too!
Posted by MsTypo at 2:49 AM

And don't forget the trip out to Millcroft with the other bro...that was a good day too with lots of the necessary to get us through lunch.
merthyrmum
Parry Sound was a great weekend with lots of food and drink and laughs...