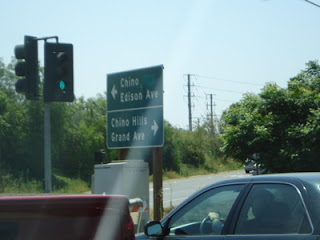 Monday morning, we left Vegas for various points in California. We were both looking forward to this phase of the trip; driving for hours has been one of those weird activities we miss most in Kenya. When else is a girl supposed to get a few hours of sleep and still have it count as spending time with sweetie and doing something he enjoys?! The best part was that we would able to indulge in one of my favourite things to do in a car: listen to Jim Rome and various other sports news programs. What did you think I was going to say?

After checking out of the Venetian we headed back to the airport to pick up the car Hubby booked. The Las Vegas airport has a really cool rental car “terminal” that makes renting a car an organized and stress-free experience. Driving to California on the 15 is also a relaxing experience – especially when you have a sausage and cheese McMuffin (no egg!) in your hand. Oh, and when you’re not the one driving and can nap most of the way there.

Our first Cali-stop was in Chino to visit K-Fu, the little Fus, and his wife Fu-ette. (Hubby Edit: K-Fu lives in Chino Hills, not Chino! I keep telling Typ0 this but she insists on taking “literary license.”) I was tres hyped to see K-Fu whom we hadn’t seen in several years. To put it into perspective for you, the last time we’d seen the Fus, there was only one little Fu and the second wasn’t even in the planning stages.

Villa del Fu was really nice. Hubby enjoyed the small basketball court while I ogled the huge jungle gym on the other side of the large backyard. K-Fu seemed to be enjoying his life near the former home of Ryan (from the OC). Our first night there, we did some shopping and then went out for great Italian food - so you know I enjoyed myself!

The remainder of our Cali-expereience was really laid back. We checked into an ocean-side hotel in San Clemente just south of Newport (Ryan’s new home!). Hubby and I ordered pizza and ate in bed while drinking champagne. We were finally enjoying the type of relaxing day we had been dreaming of when we told people we were on “vacation.”

I’ve already mentioned that we went to Hubby’s former stomping grounds of San Diego. Our “Chilling out in ‘Diego” day was spent the day driving around looking at the people from Comic Con in their cool costumes (that Hubby mocked), seeing Hubby’s old high school (with still higher fences surrounding it), and driving by his old house on our way to Lolita’s for some yummy rolled tacos.

My apologies that today’s blog is reading like a laundry list of “Things Typ0 did in California.” But this was such a nice and relaxing portion of our trip - driving around aimlessly, catching a vine with Rome, seeing old friends, not rushing for a flight, a date, or even having expectations to live up to. Just being us – in the best sense of the word.
Posted by MsTypo at 8:00 AM

Isn't "cruising" what life should be about?
merthyrmum