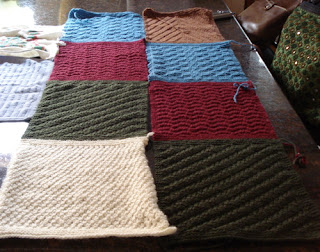 The final stop on our cross-continental journey was Portland, Oregon for a conference of nerds where Hubby was speaking. The best part of these conferences is the opportunity to catch up with old friends and make new ones. Plus, Portland is a great city for exploring and drinking and we did plenty of both.

One of our first pre-conference stops was the Doc Martin store where Hubby walked away with a great pair of boots. I, on the other hand, discovered that every single pair of size eights was out of stock. Every single one! Not that I’m still bitter about it or anything…

The other great Portland Mecca for me, at least, was Powell’s bookstore – a large independent bookstore with new, used, and even out of print books. I could be graphic about how amazingly orgasmic this store is but I realize that my mother reads this blog so I won’t go there. But it really is amazing!

The huge store calls itself “The City of Books” for a reason – there is no way you could leave this multi-level store without finding at least a dozen books that you can’t live without. Wandering its halls, I looked at the clock to discover that I had spent two and a half hours in the store without even realizing it. Due to Hubby’s strict (and miserly) rules, I left Powell’s with only six books. But I know that I’ll be back the next time we’re in Portland.

Our final great find in Portland was happy hour. On Sunday, we went to a bar called City Lights where we enjoyed tapas for between $2 to $3 per plate. The drinks were regular price but you didn’t notice because the snacks were such great deals. When we left the bar, no one had spent more than $15 or $20 total for food and drink, and no one left hungry or sober.

Unfortunately, we had one downturn during the trip. Although I was able to attend all of Hubby’s talks and presentations (which were surprisingly interesting), I was feeling slightly under the weather and missed out on several nights out. Hubby got to experience far more of the famous bar scene than I did because of this, but I did, at least, get to catch up on my knitting!

One final note about Portland: there are a lot of beggars and street people in this Hippie town. But worse than that: there are do gooders! Rare was the corner in downtown Portland where someone did not accost us from Save the Children or Greenpeace asking us for our time, money, and attention. Hubby had a nice conversation with a Save the Children person who also wanted to be a Cow Counter when she grew up. I simply avoided them by trying to impersonate a Republican. When that didn’t work with the Greenpeacers, I told them how many flights I was taking during my month and a half trip home, and how big my Environmental Footprint was. That always scared them off.

Portland was the end our journey. When we left that town, we only had a few days left in the Real World. A Real World we had never been so excited to leave behind for the Developing one. We were ready to go home.

We just didn’t yet realize what a comedy of errors that was going to be.
Posted by MsTypo at 3:11 AM

Where in the World is looking very "visited". There seem to be lots of hits.
Rug looks great!
Orgasmic book stores? Hope you are feeling better!
merthyrmum