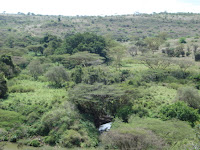 The problem with being an omnivore on safari is that every time you see a gazelle or ostrich, at the back of your mind where you least want to acknowledge it, you wonder how easy it would be to “accidentally” run one over and take it home for dinner. Not that I ever would – since that would be wrong. Not to mention that the park ranger folks tend to frown upon things like that. But it doesn’t stop the thoughts from popping up of their own volition.

Our mini safari on Sunday was rife with several herds of walking dinner – all of which we admired from a safe fork-free distance. The zebras we saw being chased by

the lioness earlier in the day were only the first of several herds wandering through Nairobi National Park that day. And they often hung out with several antlered friends such as gemsbok and gazelles. The latter tended to spook easily and were often rather skittish as our car drew near.

During a washroom break at the picnic area near Leopard Cliff, we spotted a large group of baboons at the bottom of a beautiful valley. Oddly, they were also hanging out with a stray gazelle. These baboons can often be seen hanging around the picnic area looking for scraps of food left behind by negligent diners. This time around, however, we had to hunt them down and were initially unable to get very close to them.

Since this was our second time in the park, Hubby and I were guiding our small tour group mostly around areas of the park we had already visited. After seeing the baboons, we were emboldened enough to try a new direction. So instead of heading back into the valley, we turned toward the opposite direction with a goal of seeing the less popular back end of the park.

Here, we found numerous herds of various animals including more zebras (or zedbras as the British call them), impala, and even some wildebeests in the distance. Several of the herds had babies with them, making for an interesting contrast of sizes between the large bucks and their tiny offspring. 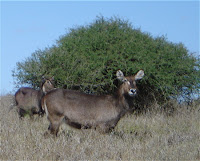 On our way out of the park, we found ourselves face to face with an animal we couldn’t identify in any of our books. We think that they may have been klipspringers but they were much larger than the ones in our animal books. (Anyone who wants to be smartie pants and tell us the answer will be rewarded with a shout-out and a great deal of thanks.) With their huge rabbit-like ears, our mystery antelope were a great find and wonderful note on which to end our day-long safari.

I have since told several people about my animal-filled day at the National Park and no one seems to believe me. Everyone here is too used to the Park being a nice day’s drive but not really a Mecca for actual animal sightings. So whether it was a gift from the rainy season, a fluke, or just a lucky chance, we’ll take it and treasure our memories of that fabulous day.
Posted by MsTypo at 1:43 AM

Great pictures--and so close to home! Hope the beasties are still there for BBS's visit.
merthyrmum

hello, it's me SGH from the northern wilds of canada. I think the mystery beast is a common waterbuck. Check out this webpage, go to the bottom antelope. Am I right? Do I get a prize?