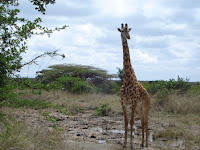 This past February when Gordon Keith was staying at chez Typ0, he and I went to Nairobi National Park and discovered what apparently everyone else in Nairobi knows: the park sucks. At a cost of $40USD for non-residents, the park is a complete rip-off with very few animals to speak of. In fact, the day GK and I went, I think we saw maybe ten total animals – I felt horrible.

Well, today I feel worse because Hubby and I went back on Sunday with some visitors and had a fabulously animal-riffic day. Before we left for the park, we told our guests that they likely wouldn’t see many animals since the Kenya Wildlife Services run park isn’t well known for its plethora of animals. Boy were we wrong!

As soon as we entered the park, we saw a giraffe that Hubby claimed was placed there by KWS to give people a false sense of hope. (There was a matching one at the exit gate we used thus supporting this theory.) At first it seemed like any other day at the National Park as we kept our eyes peeled for any elusive game. Noting a grouping 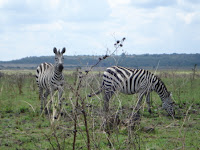 of cars in the distance, we decided to head that way in hopes that maybe they had found something more interesting than a guinea fowl.

Following the bumpy dirt road we spotted two herds of zebras off in the distance. Assuming that this was as close as we were going to get to any zebras, we stopped the car and started zooming our camera lenses in their direction.

Suddenly, the herd bolted and we all looked around to try to determine what had spooked them. We, after all, were too far away to have caused their fear. That’s when we saw a lioness chasing after the lunch-worthy equines. She mustn’t have been terribly hungry, as she gave up the hunt after only a few moments. 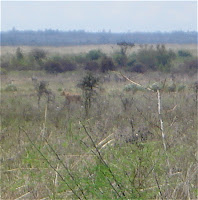 We all sat in the car with our mouths agape at the amazing sight we had just seen. The lioness continued to stalk her striped prey with lethal casualness – looking around to see if there was anything of interest for her to nibble on. The entire episode took place about 150 meters away from our car – close enough to be wowed, far enough away to be safe.

All of this happened within our first 20 minutes in the famously “animal-free” park. Hubby and I couldn’t stop chattering on about how rare a sight this was for this park, and how thankful we were that we were able to see it due to it being the rainy season. I’m not sure our guests fully appreciated the awesomeness of our local safari but then the day had only just begun.

I will share some more of our photos tomorrow – including the one of the animal we can’t seem to identify. I just wanted to say sorry to Gordon Keith that his Nairobi safari was far lamer than recent our weekend adventure. Next time you visit, we’ll import some better animals for you – promise!
Posted by MsTypo at 12:40 AM