Going to the Office 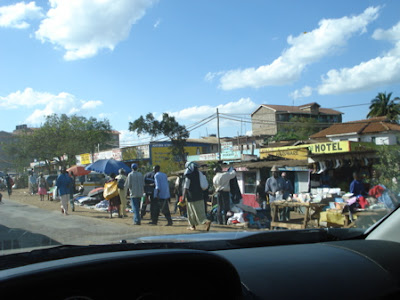 The following photos were all taken from the car while driving to Hubby’s office. There are two ways to get there: one is via the main road of Waiyaki Way, and the other way – by driving through the top of Kawangere, one of the larger slums in the city. Either way, it is hard to escape the poverty that is so prevalent in Nairobi. 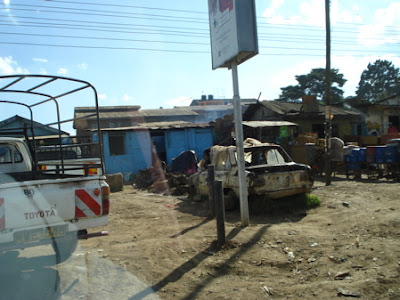 While expats live in fancy apartments and lovely “estates” and live lives complete with housekeepers, drivers, and gardeners, most locals do not live quite so comfortably. Kibera has now outgrown its South African counterpart to become the biggest slum area in Africa. I’ll admit here that I have yet to go into either Kibera or Kangeme, our two largest slums, despite their proximity to where I live – a short distance by car but a world away in reality. If you are a fan of American Idol, you may have caught a glimpse of these places when Simon and Ryan visited last season. 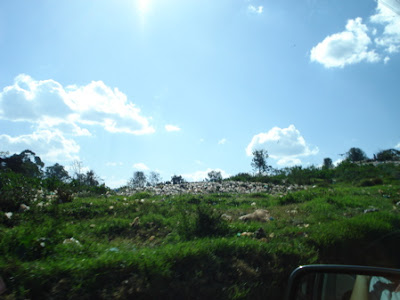 The garbage heap you see here is depressingly close to Hubby’s office – it is literally in their backyard. It is also far larger than you can tell from this photo. Garbage is trucked here daily and left to be scavenged for treasures and then burned. The scent of burning trash is a familiar one all over the city and small plumes of smoke can be seen coming from private gardens and street corners alike. 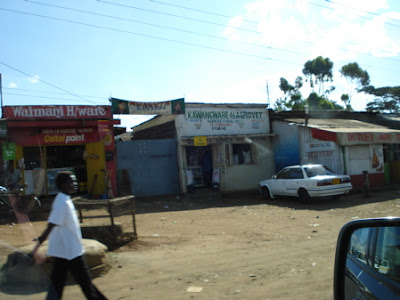 Which isn’t to say that there isn’t hope for a positive future. Many believe that the upcoming elections will herald change for the poor of Kenya. The major parties both say that corruption, the biggest hurdle to overcoming the current economic situation, will be brought to an end under their leadership. Only time will tell if patronage will continue to be the M.O. of the ruling parties of Kenya. 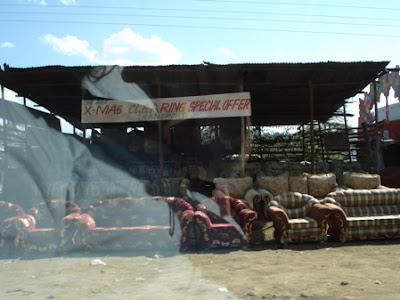 I often joke about not wanting to be a do-gooder but many of those young men and women who come to Kenya for just that purpose do a lot of good. Charitable organizations and NGOs have numerous projects specifically to assist the most needy of Kenyan citizens – from Aids orphans and street kids, to abused women and the elderly. While I’m not about to go out and join the Peace Corps, perhaps there isn’t any harm in lending a hand once in a while to proven projects that truly make a difference.
Posted by MsTypo at 4:30 AM