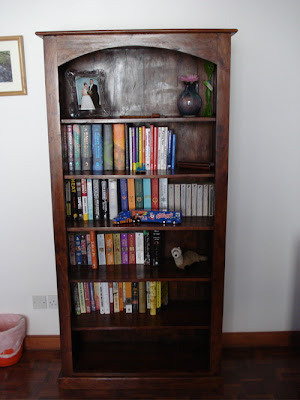 Since I’ve had several rather serious blogs in a row, I thought I’d take a quick break in my tour of Nairobi to talk about something more Typ0-centric. Back in May, Hubby promised me new shelves for our anniversary. Actually we discussed this in April but I don’t want to appear nit picky since I didn’t get them in either month.

An agreement was drawn up between us that I would purchase them before leaving for Canada. That agreement was then amended for the purchase to made in August. Then it was decided that my birthday was a better date to focus on.

However, since we were still paying off the car, we agreed to put it off until October after Storm’s last payment had been made. With the car successfully paid off, we even made it to the furniture store to pick out shelves that I liked aesthetically and Hubby liked financially. Despite finding bookshelves we liked, nothing was purchased due to a lack of credit card. Given that this story is about me, the punch line is that when I returned a week later (with the credit card) the shelves we liked had been sold. Aren’t I a lucky girl?

After a great deal of pouting and railing at fate, I returned to Odds and Ends last week determined to leave having spent money on a set of shelves for my sitting room. 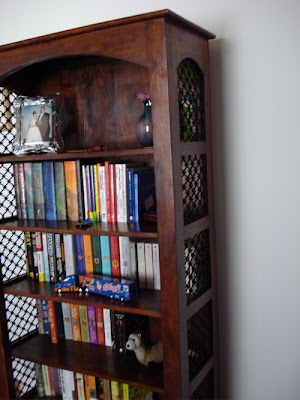 This plan wasn’t as easy to execute as one might imagine. First, the style of shelves we liked was mostly sold out and the one they had that was similiar was flimsy: a ply board backing and the shelves themselves were wobbly.

Crying inside, I went upstairs to see if there was anything I missed. And that’s when I saw them: shelves that screamed that they needed to come home with me! Best of all, they were solid wood – no ratty ply board in sight. The only hitch was that the beautiful shelves were twice as expensive as the ones Hubby had approved. Oops!

I called him and pointed out that these shelves were taller and provided more book space, not to mention that they were pretty! Hubby pointed out that I was, in his words, "a shelf whore," an insult I ignored since it was both inaccurate and mean. I think we can all imagine the pouting that was going on via my cell phone that day. After whittling down the price a wee bit, Hubby gave in and I went to pay for my lovely bookshelves.

Since I had promised that no romance novels would ever sit upon the new shelves, I moved our old (and dying) Ikea shelves across the room to make room for the new pretty ones and waited for the deliverymen to arrive. The moment my shelves were in place I spent hours organizing all of my books and deciding what looked best on which set of shelves. And then I sat down and stared at them lovingly – for several hours and from several different angles. Which either makes me a big nerd, or very scared about what will happen when Hubby finally sees the bill.
Posted by MsTypo at 1:23 AM

VERY nice!Who is in the picture (or should I ask?) and who is the odd looking doggy?
merthymum