The Kenyan elections are literally around the corner – they’re next week in fact. With the days left until voting about to fall into the single digits, you would think that all of the parties election teams would be working 24 hours a day to keep their man in the lead. But the truth is actually more interesting – at least if you’re watching out for clues.

Take PNU for example. They have the same poster up everywhere in city – Kibaki’s face big as life with one of two slogans – Kibaki Tena, or Kazi Iendelee (Continuing work). 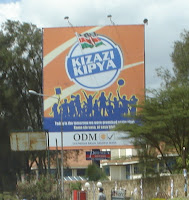 That’s why there are no PNU posters to show you today – you’ve already seen them all! That said they are working quietly behind the scenes to garner support. The flower seller at the bottom of Thigiri Road, for example, has small PNU flags adorning his stall and he’s not the only one.

The most interesting effort on behalf of PNU that I’ve witnessed actually happened in Amboseli last week. As we headed out for our final safari drive on Tuesday evening I saw an SUV pull up 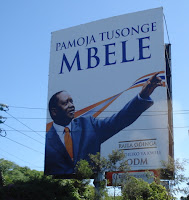 into the lodge. Since 4:00 is the universal time for everyone to leave for animal viewing it was odd to see a car driving up to the door. What really struck me; however, was the bright blue bandana the woman in the backseat was wearing to cover her hair. There were only three letters on the bandana – PNU.

While we were still out on our game drive I saw the same SUV (and bandana’ed woman) leaving in the direction of the Mombassa gate. I initially dismissed the entire episode but the next morning as we were tossing our backpacks into the back of our van I noticed something rather interesting – our driver had a PNU poster sitting in the front window. And it wasn’t just him - I counted at least three other vans with similar new window coverings. So PNU might not be working on creating interesting posters for me photograph but they do seem to be getting the message out. 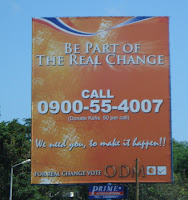 Which brings us to the other big game in town – ODM. These guys have new posters every time I turn around including a new one encouraging people to call a number and donate money toward the campaign. Should Odinga win next week I hope he gives his campaign manager a really good job in his new cabinet as this gentleman has been working overtime getting his candidate’s name out.

Last week on our way back from the Elephant Orphanage, we came upon a mini ODM campaign parade – two vans and a huge open bed truck filled with supporters cheering for their man in orange. While the caravan was seriously holding up traffic in both 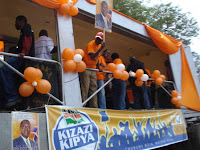 directions it was a fun sight. Since someone (*cough*Hubby*cough*) was driving a wee bit too quickly we were unable to determine if Odinga himself was on the truck drumming up his own support.

With news of the upcoming “elections” in Zimbabwe hitting the news, the posters I’ve seen not only in Nairobi but also outside of town prove that Kenya is a country that has embraced democracy and believes in ensuring that everyone get out to vote. More than that, the elections are the topic of choice on everyone’s lips – who will win, who should win, and who will do the most good for the country. These last days leading up the vote on the 27th are sure to be exciting.
Posted by MsTypo at 3:21 AM

Great information! Thanks.
We're snowed in with supplies ready for power outages.
Get packed for your next trip,
merthyrmum