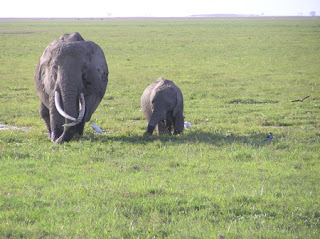 Although I had been on safari before, this was the first time I have been on a “guided” drive with a professional calling the shots. The first thing you notice in the van is that whenever you’re out the driver has his CB radio on all the time. This is so drivers can share with each other when they find something good that the wazungu will want to see. Since many drivers (and customers) believe that the driver’s tip will ultimately depend upon the game seen during the trip, finding good game like lions is considered to be of prime importance.

Amboselli is known as a great place to visit if you want to view elephants and it definitely lived up to the hype. The afternoon we arrived, we went on our first drive at 4:00 p.m. and one of the first things we saw was several elephants hanging out in a swamp. Those pictures aren’t of short elephants – they’re just knee and neck deep in a swamp. Throughout our time in Amboselli, swamps proved to be a good place to find pachyderms.

Our first morning drive was definitely elephant-themed. It started out when we (and about a dozen other vans) gathered around to see several dozen elephants out for their morning walk. With some elephants no more than a few feet away, we were able to observe the animals and their habits in some detail. 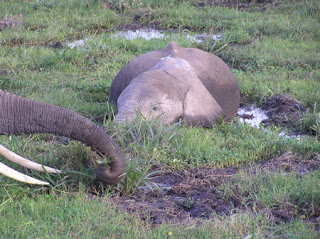 The small white birds that always hang out with the elephants are called egrets and were always fun to spot. Alex explained the symbiotic relationship, telling us that the elephant’s big steps woke up and dispersed bugs for the egrets to eat. I was never terribly clear on what the elephant got out of the relationship other than a cute mascot. (I wonder where I can get an egret to hang out with me?!)

The first thing you notice is that the Big Daddy of the herd usually walked alone. His immense size and huge tusks also marked him as slightly different than the younger bulls who seemed to enjoy play fighting more than looking studly.

Baby elephants, which seemed tiny next to their older siblings, always stuck as close as possible to their mothers. Our driver explained that you could guess their age based on their size and the length of their tusks. 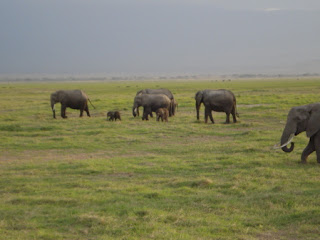 As we watched the herd wander off, we noticed that they all seemed to be very much in tune with one another. The head bull showed the way by heading off first but then one by one the others followed suit no matter what they had been doing beforehand. Although some lagged behind more than others, they all headed in the same direction in search of something they weren’t letting us in on. 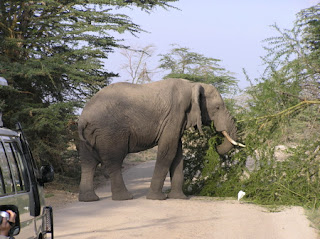 Our next elephant sighting came only a few minutes later. Alex heard on the CB that some lions had been spotted and he floored it across the park in their direction. Unfortunately we didn’t quite make it thanks to an elephant that had different plans for the morning. Blocking the road in front of us was a large bull elephant who was quite content to nibble on trees and eventually to rip them out of the ground.

We weren’t the only van stuck waiting but not one driver was willing to push past him. As BBS said, “No one tells the elephant what to do!” We never saw the lions that day but we did get up close and personal with some local pachyderms.
Posted by MsTypo at 2:32 AM