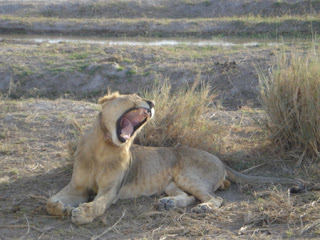 BBS, Eleanor, and I were lucky enough to be in a private van, which meant that we didn’t have to play nice with others or share our ride. Other vans we saw weren’t as lucky – some were filled to the brim with up to eight passengers in addition to the driver. The truly amusing vans were filled with safari-goers who had obviously overpaid for this “African Adventure.” You could spot this type by their uniform-like safari clothes they wore (far too many of which had sequins and beads). By contrast, the three of us were positively laid back dressed in jeans sitting in our roomy van. 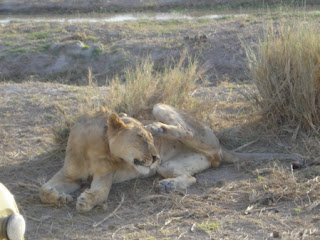 The very first day we went out on safari we hit the jackpot. After seeing what was, for me at least, some run of the mill zebra, impala, and the like, we drove past the local airport and soon found ourselves parked less than a foot away from a lion.

Our lion (which was clearly not a lioness, thank you) was sleeping in the shade when we first arrived and seemed rather annoyed to have his nap disturbed by a bunch of camera wielding humans. After a quick yawn and another withering look in our direction, we watched him go about his daily routine as if we weren’t there which made him seem almost like a slightly oversized tabby cat. 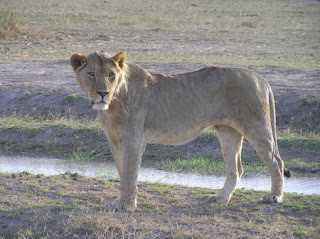 Curiously, despite a quick scratch, he didn’t seem bothered by the collar around his neck, which Alex explained away as a Park practice. Our driver/guide was surprisingly short on information during much of our trip, which was in sharp contrast with other guides we overheard who seemed far more knowledgeable about the park and its inhabitants. Much to our consternation, we later discovered that the names he told us for some birds were incorrect. It didn’t help his case that every time we went on a drive, Alex kept saying how much better the Masai Mara is and how we should have gone there instead. He kept up that annoying litany literally until the moment he left us back at my front door on Wednesday afternoon. 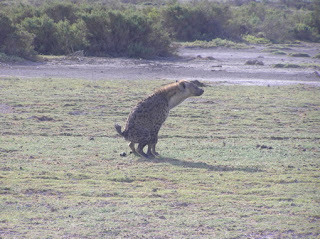 Lions weren’t the only predators we saw during our stay in Amboselli. The carrion eaters were seemingly everywhere throughout the park. Although we didn’t get to see them close-up, we spotted a pair of jackals likely on their way to finish off someone else’s kill. 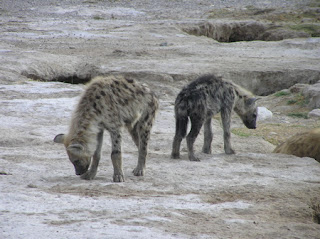 Hyenas also seemed omnipresent- we even found a lone male on our first day! We didn’t see them hunting although we did see them doing just about everything else. One family of hyenas we spotted was napping on a sunny rock and didn’t seem terribly disturbed by our presence or the sound of a dozen cameras snapping away. 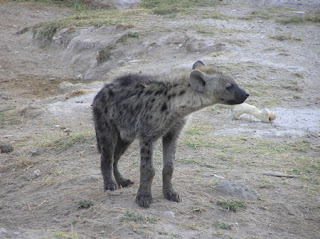 On our final day in the park, we stared at the same patch of grass for about a half hour. About a half-mile from our car, we were told that a family of lions was hiding out in the tall grass. No matter how much I zoomed in on the vague area I was told they were sitting, I was completely unable to spot a single lion that day. 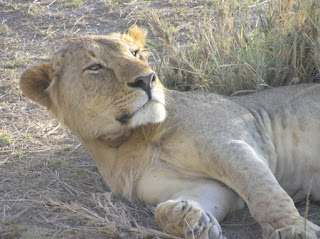 Remember that scene in “Jurassic Park” where they bring a chained goat up out of the ground to tempt a dinosaur into making an appearance? Well, on that final day I desperately wished that I had a goat or gazelle to tempt the lions out for a snack. Darn my lack of magical powers!
Posted by MsTypo at 8:51 AM

It is so devastating that the troubles in Kenya have put a virtual (or maybe it is a real) stop to the tourist trade.
And the opportunity for Kenyans to earn from their visits.