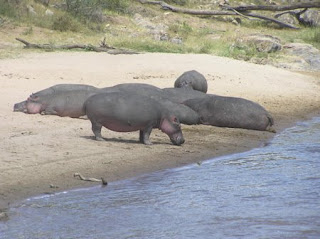 It has occurred to me that I have been blogging about my trip the Masai Mara for several days longer than the actual trip itself. With that in mind, I promise that I only have one or two blogs on the subject left in me before I break down and tell you the story of water-free week. Keeping with the water theme (without giving away the other story), I thought I would show you some pictures of the biggest water animals in the Mara – the crocodiles and the hippopotami. 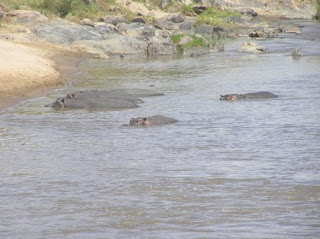 Most of the time when people hippos, the animals are swimming along and merely peeping their heads up for a breath of air. You may recall that my last hippo post boasted mostly ears. In another lucky find on our way to the hotel that first day, we drove right by a large pod of hippos sunning themselves on a bank. 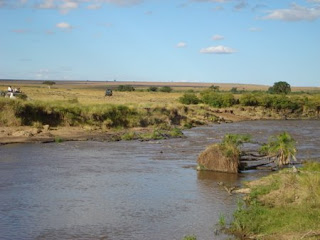 In addition to the family we saw on the riverbank that first morning, we also several swimming in a large river not far from our hotel. Our diver, DikDik, explained that when the migrations started in a few weeks, the hippos and crocs would be well fed in that particular river as the wildebeests and other animals attempted to cross. Hippos, despite being rather cute and seemingly snuggly are actually quite dangerous and need only the slimmest provocation to attack. Even standing between a hippo and its watering hole can incite a hippo to attack. 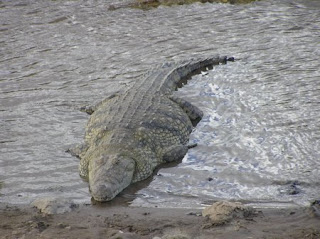 Swimming alongside the hippos were some of the biggest crocodiles I have ever seen. One in particular looked like he had no need of the upcoming migration feast as he appeared to have already eaten a few zebra and gazelles. 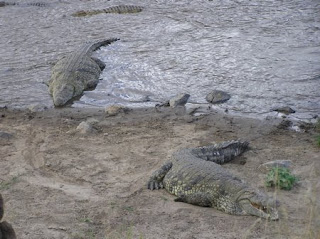 He and his friends seemed to enjoy hanging out on the bank sunning themselves and intimidating any animal that may have been contemplating crossing river. Indeed, we saw several zebra look down to the water only to turn around and look for a safer place to drink. 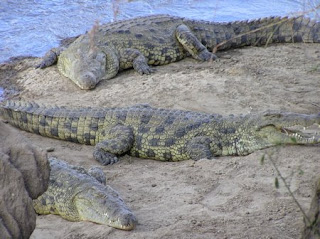 We weren’t the only safari van watching the drama unfold and secretly hoping that the zebra would risk a quick swim. Deep down, of course, we didn’t want anything to happen to the lovely zebra, yet we were all there with our cameras at the ready just in case we lucked out and with a great photo op. (You vegetarians will be happy to know that no zebras were injured in the making of this blog.) (Darn it!) 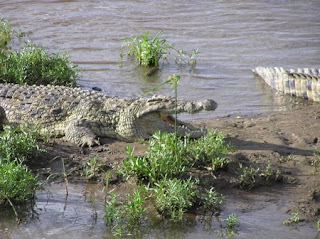 That said, one or two less zebra would not have resulted in even a tiny dent in the Mara’s population. DikDik observed that the migrations would likely occur early this year based on what seemed like the thousands of striped horses that we kept bumping into throughout the park. (Is it wrong that whenever he talked about the migrations I kept thinking that the animals were really having a family reunion – which not everyone would survive?) (Is it even more wrong that I kept wondering what zebra meat tasted like?) Lucky crocs and hippos!! *pout*
Posted by MsTypo at 2:48 AM