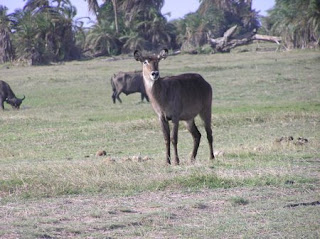 Some of you may recall back several months ago that our friend SGH was the first to correctly identify a waterbuck in one of my blogs. In her honour, we renamed this adorably large-eared antelope the H-Buck. And with this history in mind, I have a story to tell...

It turns out that when we first spotted the H-Buck late last year, we only saw females. Well, last weekend in the Mara, we spotted a male waterbuck - a HubbyBuck. 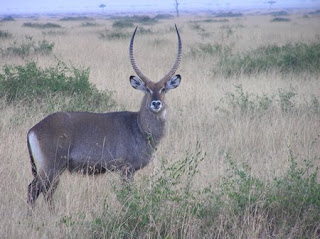 Why is it called the HubbyBuck? Because secretly, the HubbyBuck wants the H-Buck despite the fact that he is with the Typ0Zelle. (The fact that they are different species isn't important.) The HubbyBuck, although he vehemently denies it, wants to be with the H-Buck because, since they're both Bucks, have more in common. The Typ0Zelle is an antelope with a jealous streak who is very sad but willing to plot revenge with the help of her large cat friends.

As you may have guessed, Hubby and I had a lot of downtime in between safari drives. The renaming of local Mara animals, and the development of entire background histories and plotlines was a fun diversion that lasted several days. In truth, we had too much time on our hands, too little alcohol in our systems, and way, way too much imagination for two supposed adults.

What Masai Mara animal are you?
Posted by MsTypo at 3:14 AM

I'm a little worried about the revenge that Typ0Zelle has been plotting against the poor innocent H-Buck and the HubbyBuck.
Typ0Zelle doesn't really have connections with the large cats, does she? :)