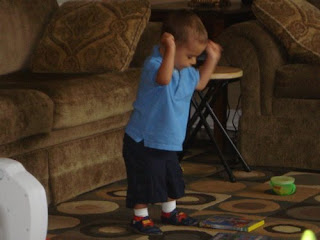 If I had to sum up this year’s home leave in one word, it would be “babies.” We played with them, bought gifts for them, fed them, burped them, and even tried to kidnap one. Alas, for those of you who were “in the know,” there are no little Typ0s on the way. Thank god!

While the biggest baby news of the trip (aside from my NOT being pregnant) occurred in the States, we’ll talk about the triplets later. Today is all about the cutest baby in the whole wide world, Carlos Jr. The first time we met him last year, he spent a lot of time regurgitating his food for us. This year we were treated to his “Bob the Builder” dance, which, in addition to being cute, Hubby has now adopted and is sadly an improvement over his usual “moves.” Despite Jr’s efforts at teaching Hubby to dance I still wanted to kidnap him and take him home. Of course, his parents, Care Bear and Carlos, would probably object to that.

Another of our many home leave traditions is getting together with C&C (and C) to hang out, eat Chinese food, and talk about the good ‘ole days when Care Bear and I were in high school. These conversations always include a recap of the first time I met her and called her a bitch, and how I totally outed her class skipping ways during her wedding. (How was I supposed to know that her mother hadn’t figured it out yet?!)

Of all my friends, Care Bear has probably known me the longest. (On this trip, I attempted to connect with someone who has known me for even longer but it never happened because I’m a huge loser.) (You can disagree about that last part now.) Together, we have lived through flashing boys playing tennis (that may have been more me than her), incredibly whacked out mutual friends, super short kilts, apple hair spray, and more.

I know that it drives our husbands crazy that we talk about the exact same things every time we see each other but I don’t care. Seeing C&C is the best trip down memory lane anyone could ever ask for. And seeing little Carlos Jr. – the World’s Cutest Baby™ - is the icing on the cake as he looks like the perfect mix of both of them. (The old me would have said that he was lucky that he got his looks from his dad, but I’ve turned over a new leaf. Or something…) Plus the kid is super smart and knows not only how to throw magnets at his mum, but that when he does so he should run straight to the naughty corner. That’s my kind of kid.
Posted by MsTypo at 11:28 AM

So no good news for grandma? Are you ABSOLUTELY sure?
merthymum