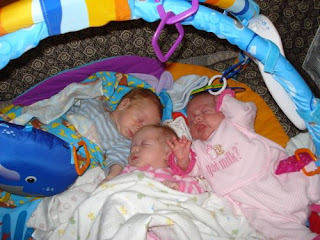 Since I’ve mentioned them at least six or seven dozen times since they were born in June, I thought that it was finally time to actually tell you about The Triplets. Our two new nieces and one new nephew belong to Hubby’s brother, BIL, and his wife, Red, who live in the middle of nowhere in the Midwest which is just over an hour away from Bee’s house where we stayed during our Midwestern sojourn.

As they are currently less than two months old (and born a month early too), The Triplets were still being bottle-fed when we saw them. And while it might be easy to avoid picking-up, holding, or feeding babies when there is only one of them around, when there are three you get roped into helping whether you like it or not. Although Hubby managed to put off his Uncle duties until the third day, I was roped into holding and feeding early on day one. I managed to feed all three of them at one 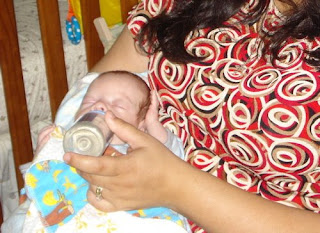 point or another during the three times we saw them. Thus, the photos here of me feeding the babies are real and not doctored.

Although it was not my favourite activity, I also helped burp them after feedings but only after I had long chats with them about the torture that they would endure as teens if they spit up on me. (Brand new, tricked out Porches for the good children, rusted out 1981-era Hondas for bad kids.) The one activity I managed to avoid, however, was changing diapers. Despite getting a good whiff of their toxic nappies, I never had to actually touch a dirty one. Thank god.

In all honesty, The Triplets are cute and my BIL and Red are good at pretending that they are not in over their heads. Thanks to a steady stream of helping hands from everyone from Aunt Bee and Red’s dad to church members willing to wake up at 2 a.m.,

they have thus far managed to keep insanity at bay. When BIL heads back to work in September, it’s possible that the asylum won’t be too far behind for poor Red who will be the sole caregiver for the three infants while he is at school. As I said, they’re doing well right now but the real tests are still ahead of them.

All in all, the kids are cute, they don’t cry, they don’t spit up on their favourite aunt, and Hubby looked really cute when he was holding them. That said, as I mentioned a few days ago, I’m not pregnant. Don’t have any plans to be pregnant. And, when all is said and done, better them than us.
Posted by MsTypo at 10:50 AM