In Which I Am Going to Hell 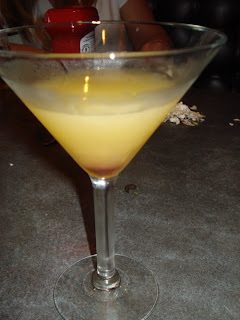 One of the non-Triplet highlights of our trip to the Midwest was hanging out with our friends at my favourite bar in the university town where we used to live. Meeting up at Guido’s over large martinis and the world’s most awesome nachos has become an annual tradition during home leave. Sadly, as most of Hubby’s friends are at or near the end of their PhDs, this may be the final such outing.

That said, while I love seeing Sconni Boy, Mrs. Sconni Boy, Not Joseph Smith, Edgar, Lola, (our kind hosts for the evening), and the rest of the crowd, the real highlight of the evening for me was hanging out with my old friends from CT&T: Wheels, Tech Girl, and Framboise. I hadn’t seen this merry trio of misfits since I left CT&T three years ago and it was a wonderful reunion.

The first bit of props for the evening have to go to Wheels who not only looked amazing after losing an insane amount of weight but also left work early for an “appointment” in order to join the festivities! He and I sat and chatted for about an hour before the girls showed up during which time we gossiped like in the old days while I sipped on martinis two and three and he drank lemonade number one.

By the time Tech Girl and Framboise arrived, we were all ready to order food and get down to some serious drinking. Eating the giant plate of nachos that was put before me was only slightly better than the fun the four of us had reminiscing about the old days. Much of said reminiscing had me saying things that will be played back for me in lieu of an explanation when I get to Hell. These conversations included choice tidbits like, “I can’t believe they did that! What about Gangrene Boy?!” “He died.” “Oh crap.” 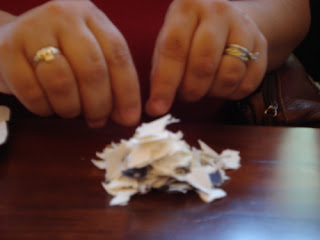 One of the things I enjoy doing while I drink is ripping up the paper coasters they give you into tiny little pieces. Bars that know me well usually stop giving me coasters after a few visits but evidently Guido’s had forgotten, and I was able to sit and shred paper all evening. Perhaps the best part of the shredding (other than sharing my coaster with Tech Girl) was raining bits of shredded paper on the table of girls behind us. Sadly, they never responded to our confetti gifts so I kept raining bits of paper on them throughout the evening. I will not be ignored!

By the time martinis four and five had been consumed, the girls and Wheels had to go home. Something about having “jobs” to go to in the morning. I didn’t quite understand but I let them go after much hugging and groping. I cannot tell you how much fun it was seeing those three again. Gossip, drinks, and causing trouble – it was like the last three years had never happened and we were all back at CT&T again. I miss them.

Of course, I really missed them when the boys decided to move locations and try out a new piano bar on the other side of town. To say that we were overcharged when we paid the $5 cover charge to get in was an understatement. Two pianists singing off-key and only playing the correct song about 40% of the time is not what I’d call a successful concept. Other than flashing (upon request from the boys) my new purple polka-dotted bra for the umpteenth time that night, the piano bar was pretty much a bust (pun unintended).

Worst of all, since I was thoroughly sloshed from Guido’s, I opted not to drink at the second bar so I was sober for all of the bad music. *shudder* Luckily, no one else in our group was terribly impressed so we left after about an hour or so. Of course, being the smart-ass girl I am, I made a point of filling out a request card before I left and left it on the piano. “Stop playing and learn to sing in key. Please.”

How many martinis? And you actually stopped drinking :)or :(?
Home again when??
merthyrmum