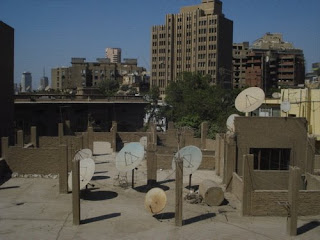 Always one to keep my promises, I am once again going to talk about Cairo now that our days as Cairenes have hit double digits. I am loath to make any solid assessments of the city, as we haven’t been here that long and my words will likely be used against me at some point in the near future. That said, I have never been one to hold my tongue (or keyboard) for long, so I may as well delve into some first impressions.

Thus far Cairo doesn’t suck. Don’t get me wrong, it isn’t great (yet) by any stretch of the imagination but compared with our initial days in either Delhi or Nairobi, it could be far worse. As Hubby was quick to point out to me on Wednesday night as we watched our newly installed cable on our lovely new flat screen TV, he’s actually home to help. Unlike our previous international moves that required him to be at work the day after we arrived, being at the Institution means that our settling-in period has been relaxed and relatively stress-free. (Note that I said relatively and not completely.)

Take the aforementioned cable as an example. We emailed (!!) on Tuesday morning, they called on Tuesday afternoon, and showed up exactly when they said they would on Wednesday to install and set-up our cable. It was so scary easy that I didn’t even have to yell (or participate). 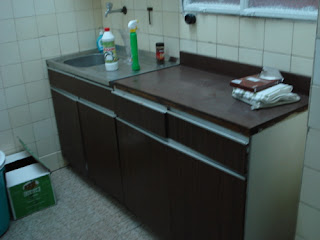 Thanks to Hubby’s fine sous-chef-like assistance, I cooked our first meal last week – a rather nice risotto that featured actual pancetta. (Go Maison Thomas!) Of course, to get to that point Hubby spent an hour cursing the pathetically lame knives we were given and wishing death on whomever designed our user-unfriendly kitchen. I then stepped in and cursed the lack of cooking space as I balanced half of my implements on our poorly placed microwave and the rest on my moveable island whose name is Hubby. Long story short, if we are expected to turn out meals that aren’t ordered on Otlob, we are going to need a kitchen redo.

Speaking of delivery – it works, and works well. We have already practiced our Otlob skills on both McDonalds and Chinese food. And Papa John’s got Hubby’s cheese-less pizza thing down in our first solo attempt. More importantly, however, is that we have tested and happily stocked our fridge with beer thanks to the services provided by the delivery beer guys at Cheers. Go Cairo!

Which isn’t to say that it has all been hunky dory – you have, after all, seen the photos of my horrific furniture. We have received promises that if we ask again next week, someone will come and see the problem in person and (hopefully) do something about it. The problem is that we have a laundry list of problems and, for fear of 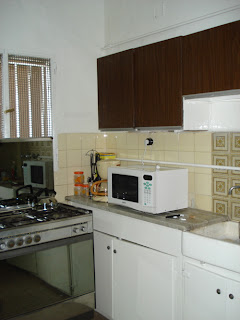 overwhelming them, have only actually mentioned two. The kitchen nightmare may be with us for far longer than either of us care to admit or contemplate.

In addition, while my new haircut looks great, it only stays that way as long as I don’t leave the apartment to walk in the billion degree heat that manages to leave me literally bathed in sweat in less time than it takes to reach the end of our street. I’m pretty sure that the policemen at the end of the street think that a really fat drowned rat moved into the neighborhood.

Also wonderful are the triple parked cars around which I have to maneuver in order to get anywhere in our neighborhood. Between the cars trying to run me over, the local men spitting at me, and the random puddles that I am I hesitant to question due to the lack of rain in the region, walking to the local shops has become an adventure that I look forward to every morning.

Honestly though, we shouldn’t complain. Tomorrow, we will head off to the Institution’s offices to meet the other newbies and begin our weeklong “orientation.” While I’m sure that the week will have its dull moments, it is far, far more than we have ever received from either of the Organizations Hubby worked for previously. In theory, we even have a “buddy” who will take us around the city and help acquaint us with our new lives.

So stay tuned for more photos of the fabulous view from my bedroom window, more tales of delivery food, and definitely more stories about how Cairo is trying my patience and driving me to the edge. Who knows, by then I may even have Internet that I’m not “borrowing” from a generous neighbor. Stranger things have happened.
Posted by MsTypo at 3:11 AM

Love the new blog picture!
Kitchen doesn't look too bad but, I suppose, compared with your former kitchen it ain't good. Can't things be moved around (suspend the microwave? Move stove from in front of window? etc.)
Hope today went well :)
merthyr mum

Welcome to Cairo :-) See that you have found Otlob - that's a requirement! The humidity these last couple of weeks is quite high. I keep telling myself that it is good for my skin, but I am not so sure I am convincing me. Hang in there!

Can't wait to hear more about Cairo! Cool life you're leading, it seems to me!