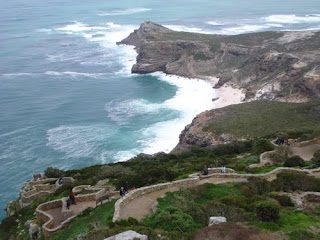 Yesterday I told you about the wonderful tours I was lucky enough to attend thanks to the folks at the Anti-Veg conference. What I didn’t tell you about was the bizarre woman who took us on those tours: Tourist Lady. A transplanted Namibian who moved to Cape Town as a child she has evidently hated it ever since.

Tourist Lady certainly knew the city and its history but her personal comments ranged from puzzling to outright offensive. Her explanation for District Six, for example, was that the government saw that there were slums in that area and bulldozed them to make room for more housing with better views. Hubby’s mouth sat agape during most of that one when he wasn’t spluttering and trying to explain the truth of the situation to the Korean gentlemen next to us.

She spent most of the week trying to convince the ladies on her tours how dangerous the city was. “After five o’clock stay inside unless you are with a man. You will get mugged or worse.” “Do not walk in this area as there are many immigrants here who will try to harm you.” By late Tuesday evening, I clearly wasn’t the only person ready to tell her to leave her editorializing at home.

Hubby’s favourite comment, however, came on Wednesday: “You know what a Rastafarian is don’t you? It is someone who smokes weed.” She then explained to us what weed was. “Rastafarians smoke a lot of weed. I know because my daughter is one. We all have our crosses to bear.” (Hubby edit: there are even more politically incorrect musings of this woman that have been omitted from this blog).

Sadly, I can’t make this stuff up. I’m just glad that having been here before I had some basic knowledge of the city before the tours began or I would have been locked in my hotel room after dark like some of the ladies. I’m sure that Tourist Lady meant well but her fear mongering and borderline racism only got her several annoyed customers and an official complaint from at least Hubby and me.

Overall, though, our time in Cape Town was wonderful. Hubby gave a fantastic speech that was well received. We purchased six bottles of wine, two bottles of MDC (sparkling wine), and lots of biltong. We also met some really interesting people and had a fabulous time. Sounds like a successful (and almost free) vacation to me!
Posted by MsTypo at 4:22 AM

bear=bare?
Anyway, I hope that you both have reported/mentioned the absolute inappropriateness of your tour guide as she obviously should not be rehired to spout such musings to unsuspecting tourists.
merthyrmum

This does not reflect well on the Cape Town tour industry. How did you find such a horror?

Please tell us so that we know who NOT to recommend should anyone enquire.