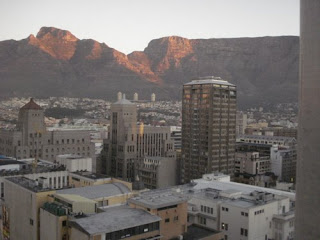 When the media wants to define a city, they usually select one image to represent everything that location has to offer. For Toronto, its Harbourfront with the CN Tower and Sky Dome just off to the left. For Washington DC, it is often the White House or the Washington Monument. The Eiffel Tower usually stands in for the entire city of Paris. And for Cape Town, it’s Table Mountain.

This beautiful bit of rock defines not only the city’s skyline but also the demeanor of its residents (open but guarded) and its weather (cool and breezy). We were so grateful for the impressive view of Table Mountain outside of our hotel room window that we never closed the curtains during our weeklong stay. This allowed us to see the mountain shrouded in clouds when we awoke, bathed in sunlight at midday, and darkly imposing as the sun set each evening. 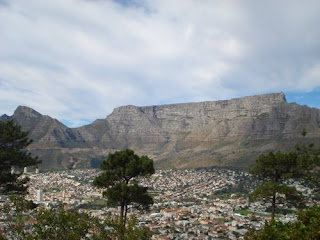 Sadly, we don’t have any photos from its peaks since, for the second trip running, we failed to to ascend Table Mountain. While the first time we had the excuse of a power cut in the area, this time we had only poor planning and ourselves to blame.

Which doesn’t mean that we didn’t see Cape Town – we did. Or at least I did. This conference offered a “spouse package” which meant that after I watched Hubby’s keynote speech, I was no longer obligated to sit around and attend the non-drinking, non-eating portions of the conference. The two-dozen or so spouses (mostly wives) were entertained each day by a series of guided tours throughout the area.

Monday’s bus tour of the city marked its first stop at the local version of make-out point. While that might not be the name or intention of the location, I nonetheless 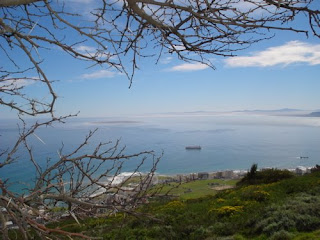 witnessed it serving as such. From Sea Point, we were able to see a panorama of the city with Robben Island out in the water ahead of us, the city below and behind us, and Table Mountain above. Despite the slight nip in the air, everyone made the most of this photogenic spot for the 45 minutes we were granted.

Tuesday was the much-anticipated wine tour to the House of JC LeRoux. While it may have been early-ish in the morning, I was disgusted by the number of people claiming that they could have done without the tour entirely or wish that it hadn’t lasted so long. I for one came to Cape Town to enjoy the wine and if they didn’t realize what they were getting into when they boarded the bus that morning, that was their bad.

During our wine tour, we were taught about the methods used in the region to make champagne – or MDC (Methòde Cap Classique) as they call it. Many of you may recall that I once studied this process (Dom Perignon anyone?) and I thus acted quite the brat when I politely inquired how their “Methòde” differed from the Methòde Champagnoise used in the Champagne region of France. If looks could kill, I would have died on the spot without ever having tasted (let alone purchasing) any LeRoux bubbly. They don’t differ at all, you see, but due to very strict international laws they are required to call it something different. 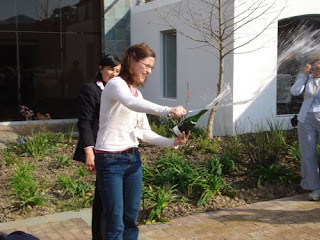 After we sampled several different lovely and dry vintages, our wine guide took us outside for one of the cooler demonstrations I have ever seen. Specifically, we were taught how to open a bottle of bubbly with a sword – or sabrage as it is known. After explaining the history behind this showy parlor trick, our guide proved how easy it was by having one us do it for her. Very cool.

Mid-week, the organizers planned a group event, which allowed everyone to choose their adventure… err… tour of choice. Hubby and I were assigned one that proved to be quite interesting and replete with things we had never seen on our previous visit to the city. Wednesday’s tour included a tour of some of the area’s bigger tourist draws including the Kirstenboch Gardens, Cape Point, and a visit to the local penguin population.

While most people, from what I could gather, were busy enjoying the various local flora and fauna, Hubby and I found an incredibly cool sculpture garden. All of the pieces were locally made (and some for sale) and labeled with not only the title but also the artist’s own words about their inspiration or view point. We literally have almost two-dozen sculpture photos, as we spent the better part of an hour and a half enjoying their cold beauty. 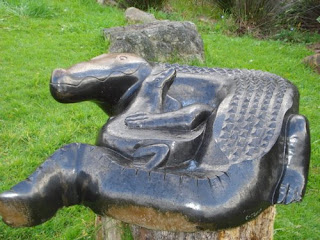 This one is my favourite. While there were certainly better or more detailed ones, the look of happiness on this alligator mommy’s face is priceless. Motherhood is the same regardless of species or tendencies to kill for fun. 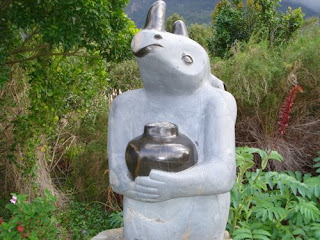 This one is one of Hubby’s favourite. Entitled “Beer for the Spirits” the artist claims that he was inspired to create this piece by his totem – the rhino. 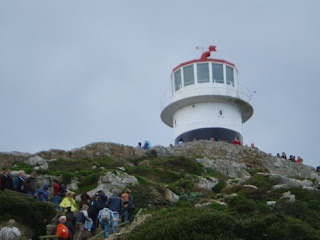 Normally, Cape Point would have been a lovely portion of the tour but the power was out that day. This meant that the only way up to the summit to see the famed lighthouse was to walk. (Needless to say, Hubby took these photos.) Moreover, it was freezing and raining so even sitting back and enjoying the amazing views at ground level involved quite a bit of shivering and cursing under one’s breath. Complaining aside, Cape Point, which is famous for being the spot where the Indian Ocean meets the Atlantic was beautiful and incredibly peaceful.

Our final pre-dinner stop was one suitable for the whole family – a visit to see the local penguins. The n-guins (as Hubby took to calling them) were adorable and used to 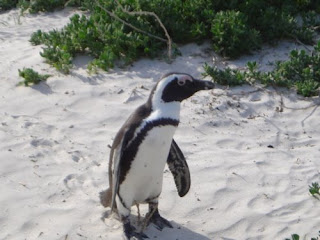 humans invading their space. While people were not actually allowed to touch or pet the small birds, we were certainly close enough to be a distraction to their cuteness.

Due to the time of year, we were fortunate enough to spot some baby penguins with their soft downy brown feathers. The young ones often stood grouped together as if hanging out after a long day at Penguin School. We saw the loners standing off to the side looking rather sad and friendless, while a few of their braver brethren were standing where the ocean met the sand as if bragging to the females further up the beach that they were the braver and cooler kids. 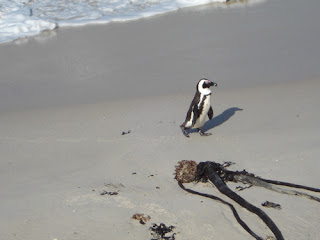 I skipped Thursday’s walking tour of the city so that Hubby and I could visit the V&A and do some non-typical tourist shopping. (No painted ostrich eggs us for us, just towels and crisps!)

The best part of Cape Town, as you may have gathered from today’s rather long entry, was the views. No matter where in the area you are, there is beauty everywhere. From the flat-topped Table Mountain watching over its charges in the town that resides in its shadows, to the two oceans that meet on her shores, Cape Town is a city to be consumed by all five of the senses.
Posted by MsTypo at 3:15 AM

Looks like you had a great time. Glad the penquins were in place. Did you purchase a sculpture?
And of course you had to by the bubbly!!
Did you go out to little sister's hospice?
merthyrmum

Photos are gorgeous! We have also had some penguins here in Rio but most do not fare as well.