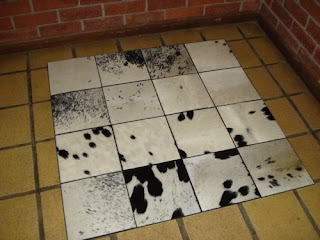 As I have mentioned previously, Hubby was invited to be the keynote speaker at a conference of Anti-Vegetarians in Cape Town. While I may not have mentioned the anti-veg part before, it didn’t take a rocket scientist to figure it out these guys’ agenda.

During the six-day conference, we were treated to three dinners all of which boasted menus of meat, meat, and more meat. I’m not even exaggerating for a change! Monday night’s welcome dinner was a carnivore’s delight as we were presented with everything 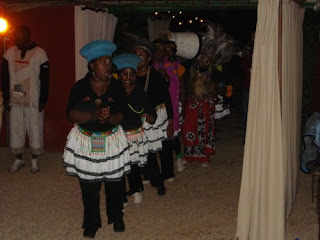 from springbok sausage to antelope steaks. Two or three vegetables were served but they weren’t to be seen on many people’s plates. And when people got tired of eating dead animals there were some really cool dancers (and lots of random ducks) to amuse and entertain the masses. 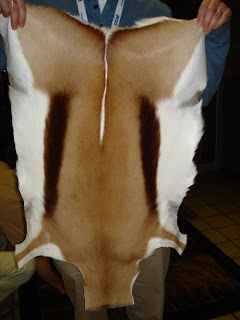 Our second dinner was hosted by a government organization and bothered with only one small plate of salad for the entire room to nibble on between platters of springbok biltong, ostrich steaks, wild boar stew, and other yummy treats. To add insult to injury for any vegetarians in the vicinity, the décor for this particular meal included dead animal heads and skins on every wall. A gentleman who will, for a small fee, tile your home in animal hide supplied the latter. While dead animals may taste great, neither of us was too keen to use them in our decorating motif.

Until, that is, we were presented with an opportunity to buy a springbok hide for only $20. I’m not sure if it was all the game we had consumed, the wine, or simply a case of peer pressure, but before the evening was out, we were the proud owners of one female springbok hide. (Or as Hubby likes the tell the tale, it was the hide of a random Buck who spent too much time flirting with the HubbyBuck in front of the Typ0zelle. But we all know that I’m not the jealous type and he’s silly like that.)
Posted by MsTypo at 3:24 AM

pray tell what are you going to dowih that thing?? A wallet or small purse?? Mary

Hahahahaha
Ok what? An ANTI-Vegetarian's conference? I have definitely not ever heard of something like that. That is sooo funny. I would like to know more about how your husband was chosen to speak at such a thing!

i would like to think it doesn't take alcohol, peer pressure and only $20 for me!! haha!