The Curse of Pheromones 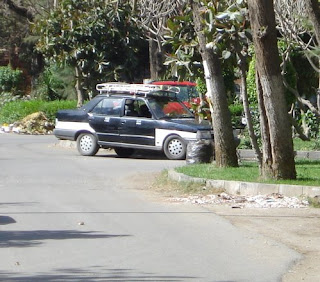 Last Wednesday morning, I met the lovely Lynda of Lulu’s Bay, who kindly invited me for coffee out in Maadi. Since I had made a point last week of getting out of the house to explore every day, I wasn’t worried about getting in a taxi and driving across town. Little did I know that my natural sexiness would almost cause several traffic accidents before I even managed to get on the road.

After showering and putting my hair up in a sweat-proof ponytail, I headed out to one of my favourite taxi finding spots. After walking a few meters down the road, I turned around and searched for a black and white taxi. I spotted one coming around the corner and stuck out my hand in a manner I’m sure would have impressed any seasoned New Yorker. I was pleased when the car pulled up before me.

Or I should say, I was happy until I noticed that there was already a passenger in the car. Despite trying to wave off the car, the driver kept following me. “You have someone in your car! I am not getting in a car with two men!” I explained in a semi-rational tone. After literally five minutes of stalking me, the taxi driver finally got the point and drove off.

Less than twenty seconds later, another black and white pulled up. This car had a woman in a yellow dress sitting in the back. I explained once again that the driver had a fare and he shouldn’t stop to pick other people up. The Lady in Yellow agreed and was became visibly annoyed with her driver who finally took the hint and left.

Several full taxis later, I finally had a passenger-less car approach me by cutting off three lanes of traffic and almost running over a police officer. Of course, the overpowering pheromones that had been affecting taxi drivers since I had exited my home continued to haunt me as the driver spent the next thirty minutes flirting with me. He asked me my opinion of Islam and Cairo, and asked when I was going to start Arabic lessons. And then asked for my phone number.

Several hours later, I returned home and recounted my story to Hubby who explained that it wasn’t my innate hotness that prompted all those men to stop for me. It turns out that taxi sharing is standard practice here. Black Beard later chimed in and said that the light flirting and exchanging of phone numbers was also common here.

So what is the moral of today’s tale? Other than the fact that I am not as irresistible as I thought, and that I don’t have magical powers over the taxi drivers in Cairo, I think I can safely say that today’s lesson is that one should never look a gift taxi in the mouth.
Posted by MsTypo at 3:19 AM

I still think you are very brave and am in awe of your taxi handling skills...

No! Really! It is you. Don't listen to those silly males. You are female and entitled to whatever ego boost you want.

It is impossible to take a quiet stroll in Maadi. I walk back and forth to the kids' school. It's only a mile one way, and unless there's an emergency, I've made a deal with myself - no taxis. I cannot run for exercise, so walking it is. I've been doing this for ??? how long?? I should be familiar to ALL taxis in Cairo. They should ALL know that I do not want a ride. But no. Beep beep beep, wave wave! No! And if I should have knee pain and carry my cane or walking stick.. I pretty much have to climb over piles of eager-to-help taxis to even get out the gate. Ok... thank goodness they are there when I need a ride, but I need my walks! :-D

I personally believe it was the sexual energies you give off!!

And....the arabic lessons are on or not? !!
merthyrmum

Taking a taxi in Cairo, yep I could make a documentary about it!!! Serious! Anyway I will post a blog one day about this subject as I think people should definitely share in my experiences. For now, the best way, never accept a taxi who is offering YOU a ride. You have to be the one who is selecting (the ones who try to get you in will just want to ripp you off). Do not share taxis unless you can sit with a FEMALE in the back, never take a seat in the front. Then put sunglasses on and pretend you are reading EWasseet (don't hold it upside down :-) and do not talk. You can also pretend to be on the phone. Have exact fare ready, pay and walk out while they complain about the amount you have given. Use these guidelines and taxi-life will be soooo smooth.