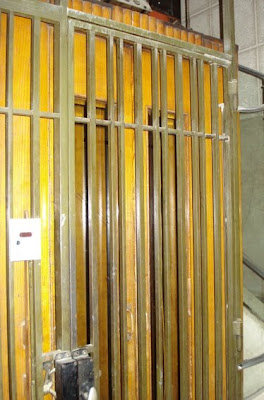 As many of you know, my biggest complaint about our incredibly awesome flat in Nairobi was that we lived on the fourth floor and didn’t need a Stairmaster™. The lack of elevator in our old apartment was a problem on those occasions when we had groceries, or twelve heavy suitcases, or when I just plain felt lazy. In other words, walking up four flights of stairs several times a day bothered me about 98% of the time.

Our new fifth floor apartment, I am pleased to report, comes complete with two rather old school elevators. Of course, I think that they may well be two of the original Schindler elevators from the turn of the last century and only one of them ever works at a time. But beggars can’t be choosers, now can we?

The tiny two-person elevator is fronted by two wooden shutter doors and a metal gate on each floor. All three must be closed or the elevator won’t work. In case you’re wondering how I know this, Hubby decided to test the door theory last week. As we were on our way down to the ground floor, he decided to open the wooden door to “see 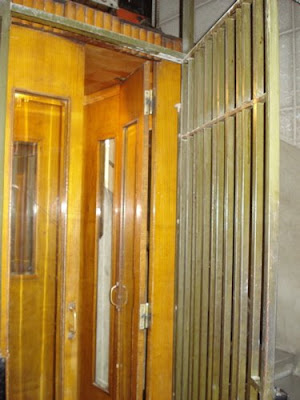 what would happen.” The elevator stopped in between floors and Hubby’s latest science experiment was complete.

The elevator has broken down at least once since we moved in last month and evidence of previous repairs isn’t hard to find. A mysterious cardboard box is covering what we believe to be part of the electrical system between two floors. As you pass each floor, the car makes an odd scraping sound that we have decided to ignore and justify as useful for the blind.

None of which is to say that the elevators are anything less than cool - their old fashioned quaintness adds to the charm of the building. The wood has been rubbed smooth after years of use and the mirror isn’t entirely unflattering. But when all is said and done, I do like old, quirky things. Isn’t that right, Hubby?
Posted by MsTypo at 2:24 AM

Well, maybe the stairs will be my choice! They remind me, not of school elevators, but those in small hotels in Europe and south america!
merthyrmum

ALWAYS take your mobile with you in the elevators in Cairo plus a bottle of water. I used to have an elevator like that in Bucharest. (actually looking at your pic, those wooden doors gave me a flashback). Of course just when I had to give birth, rushing to the hosp the elevator stopped between somewhere the 4th and 3rd floor for a few minutes, the power went off. We got out and it broke down. I almost fainted just to imagine what could have happened. After delivery, of course nobody had fixed the elevator, I had to crawl up 6 floors with baby and stitches. I will never forget. Btw Il Marito works in the Four Seasons. If you like a good rissotto and sunset, come by!

I get worried about the old elevators around here too - but I also agree with you. They are really kind of cool too. Esp. the old wooden ones.