Soaking in the View 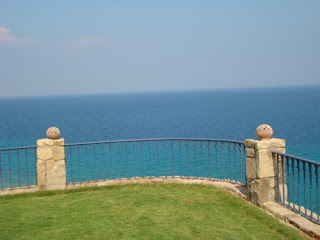 Last week, Miss Four asked me what I didn’t miss about Kenya and I immediately knew the answer – the sense of awareness I had to have at all times. Or, more succinctly – I don’t miss the safety issues involved with living in a city whose nickname is NaiRobbery.

Don’t get me wrong: I always played down the safety issues when we lived there because it made my sanity easier to live with. Truth be told, eventually you get used to living behind 10 foot walls with barbed wire, topped with another few feet of electric fencing. I got used to not wearing certain pieces of jewelry, always being aware of my surroundings, how closely other cars were following us, or if someone appeared to be taking too much notice of my trip to the ATM. It became second nature to always be vigilant to the point where it seemed normal.

I realized a few weeks ago that despite having left Kenya in July, it had still made its mark on me. Hubby and I had been invited to a department picnic at the home of a colleague outside of Cairo. The colleague’s beautiful home was only surpassed by the 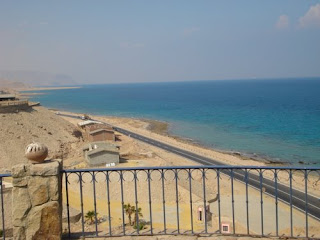 incredibly breathtaking view from his back garden. This weekend home had a completely unobstructed and beautiful view of the Red Sea. As soon as we walked outside Hubby and I joked that we would never get any work done if we lived here since we would likely spend our entire day staring out at the water.

Shortly after arriving, I walked to the end of the garden to get a closer look at the Sea in all its splendor. I looked down at the granite rock immediately beneath the garden wall and then further to the road below. I barely noticed the undulating waves in front of me.

“This place isn’t safe,” I said to Adelpha who was standing next to me. “A criminal could easily scale these rocks and climb over this fence. This house is just waiting to be invaded and robbed.” 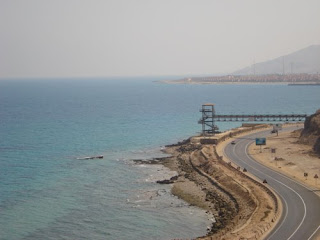 Adelpha looked at me with mouth agape. “You didn’t even notice the view,” she said sadly.

She was right. I missed the beauty that was in front of me because my mind was still programmed to look for dangers that may or may not be there. I no longer lived behind walls that were guarded 24 hours a day but that sense of self-defense that Kenya had ingrained in my DNA was still there, forcing away the landscape and seeing only the threat that wasn’t there.

From my bi-weekly visits to the Massai market and attending Association meetings to the lush colour palate of the city and being a “regular” at my favorite lunch haunts – there are definitely things I still long for about Nairobi. What I don’t miss is having to dismiss the reality of a city that requires weekly security reports. I don’t miss locking the doors to my vehicle within seconds of getting into it. I don’t miss driving twice around the traffic circle to ensure that no one is following me home late at night. And I don’t miss hearing about my friends being mugged at ABC Plaza or being attacked and tied up in their homes. There are definitely some things I don’t miss at all about Kenya.
Posted by MsTypo at 2:16 AM

I am sorry that the fear lingers. I am starting to develop a general sense of anxiety just being in Germany, so I can't even imagine how I would be in more dangerous environments. Just looking at what happens in Africa right now is making me cry, from very far away.

Gosh... sounds nerve-wracking... that's how I felt when travelling around Brazil. And when in South Africa, our guesthouse was attacked and a bedroom door caved in by robbers with machetes.

No fun at all! Even the UK feels unsafe for kids these days compared to Sweden.

And what a lovely view from your friends' balcony!

I've lived in places like you describe and its not fun. It stays with you. But some safety awareness is a good thing.

That is a pretty view.

I agree, I wouldn't be able to get any work done, either, if I had a house with a view like that!

Very interesting to hear how security issues follow you around. I had never thought about it that way.

What an absolutely fantastic view! Your friend is very lucky.
A modicum of safety awareness is essential everywhere these days, unfortunately.
merthyrmum

Brrr.....I guess that will take a while to wear off.
I guess we all take some sort of baggage "home" or to another place from the places we've lived.
Sigh :)

And yes, the view IS gorgeous :D

I'm lucky to have ended up in a place in the world that requires little safety consciousness - I've fallen asleep drunk on the subway (not alone, granted, but the people I was with were all asleep too) with $200 in my pocket without any doubt it would still be there when I woke up. In fact, for all that I've travelled to a few places considered a bit dangerous, I've so far only been mugged once - in Italy.

And that really is an amazing view.

That is a spectacular view! It reminded me of the Asian Pacific...so blue and clear.

I remember driving to the Ritz in Doha in 2001. We were at the one stop light in Doha, and I was alarmed by a man walking directly toward our car with a machete. Makes you think. I don't miss doing checks on the car every time we entered it and left it to look for signs of tampering/bombs.

Yep, don't miss that at all.

What an interesting experience. I've dreamed of going to Nairobi but I can't imagine...
Anyway, I would love for your blog to be a part of blog4reel.com – the world’s first blog-to-film competition. It’s free! All u do is link this blog to blog4reel.com for a chance to win 2,000!

That is frightening! I can't imagine living in fear like that. And I can totally see how that would stay with you. Forever.

I am so terribly sorry that you still carry that fear with you. Something like that takes so long to come to terms with. But recognizing that you were missing out on that view made you then truly see it...so in that way you were blessed. Because by knowing the ugliness of confinement, you can truly appreciate the beauty of the freedom of nature.

I understand some about Kenya, although not from a first-hand experience. My aunt and uncle lived in Nairobi for many years, as my uncle worked for Boeing there, so I have heard much about it. I am just glad that you are safe and well and able to enjoy the beauty that surrounds you.

Great pics. You've satisfied a nosey curiosity I had about what the views were like from those houses!

I suppose that having to live with awareness of such danger is a surrender of innocence. And surely, innocence lost is a permanent thing.

Now, I did know the Red Sea wasn't red, but for some reason I never expected it to look like that :)

your photos are beautiful. I wonder how long it takes to reverse the feeling of always being on guard. Glad I found your blog!

I grew up in a bad area in Florida. We locked our doors as soon as we walked in. Cars and sheds were always locked. Security lights were always kept in good repair. It was not uncommon to be caught in the spotlight of a police chopper patrolling the area... no slipping out to the workshop in your PJ's at night.. the cops would light you up! I still lock and double-check. My hubby is from a much more relaxed part of the world. When we were first married, I was forever locking him out of the house, in the garage, the car, etc. :-D