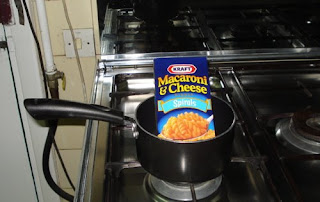 Since Four Foods is taking a well-deserved Christmas vacation, I won’t be participating in my usual weekly series of questions. But I didn’t want to abandon my readers to a whole week without any food related dish.

Last month, I avoided telling the story of the most embarrassing meal I ever cooked. The fact that this story could also go into the “foods you burn” category didn’t encourage my honesty either. In fact, I would go so far as to say that the real blame for the story of my worst meal lies with not only my innate laziness but also with the makers of convenience food for trying to find even easier ways to prepare easy food. 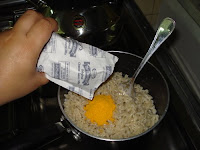 It isn’t exactly a secret that I am addicted to KD, Kraft Dinner, Kraft Mac and Cheese. Call it what you will, but at the end of the day this plastic food is a darn yummy taste of home. Everyone knows how to make this childhood favourite: boil water, add pasta, drain when cooked, add butter, milk, “cheese,” and serve. There are variations of that standard recipe that include leaving out the butter and milk, using cream, or even adding vegetables in an attempt to make this meal healthy.

Then the wise people at Kraft figured out that boiling water and later draining the pasta was far too much work for the average lazy chef. That’s when they added this alternative method of preparation: add water and pasta to a bowl and microwave for five minutes or until all the water has been absorbed. Not only did you no longer have to drain the pasta, but you could also cut an entire seven minutes off your cooking time! 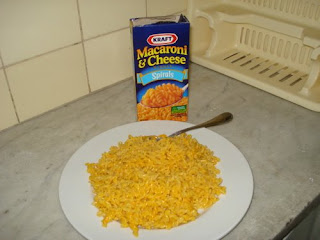 By now, you should have all figured out that I am one of the laziest people on the planet, so naturally when I read this alternative preparation method, I jumped aboard. The math was simple: Bowl + Water + Pasta + Five Minutes On High = LUNCH.

Then, one day my autopilot went wonky. I threw everything in the plastic bowl, set the microwave and headed down the basement of my parent’s home to watch some television. About three minutes later Murphy, our black lab, bounded into the basement and nosed my hand repeatedly.

“Yes, you’re cute. Go away,” I said patting his furry head. But he persisted.

Annoyed that Murphy was disrupting me, I grumbled at him and headed back upstairs to let him out into the garden. Halfway there I smelled smoke. A lot of smoke. 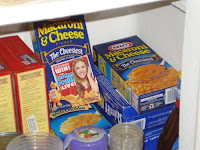 I ran into the kitchen and saw that the microwave was all but on fire. I hit “stop,” opened the door and was greeted with the noxious fumes that only melted plastic can emit. After I let the dog out, I opened all the windows, turned the fan on, and attempted to get rid of all the evidence of my kitchen disaster.

Mid clean up it hit me: I had messed up the equation. Here’s what I had done in my haste to consume Kraft Dinner goodness: Bowl + Pasta + Five Minutes on High = Lunch. Do you see the problem?

I forgot to add the water. Consequently, all the microwave had to cook was the pasta (blackened to a char after only a handful of minutes) and plastic bowl made from a thousand different toxic smelling polymers. 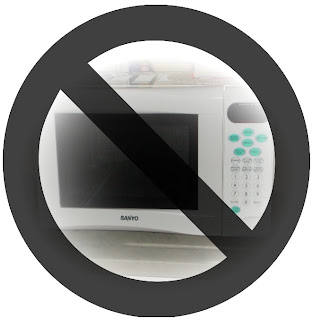 I would like to tell you that I learned my lesson. That is, after this incident, now I always remember to add the water when boiling water and would never cook KD this way again. Moreover, maybe this would have induced me to stop eating the world’s most plastic food as a result. Sadly, none of those lessons ever stuck with me.

To this day, I love Kraft Mac and Cheese. And worst of all, I pulled off that plastic melting catastrophe not once but two more times. What can I say? I’m more than a part-time chef – I’m also a full-time screw-up!
Posted by MsTypo at 1:24 AM

That's hilarious! But you are not alone... I've already told you the story of how I boiled cabbage without water...

I too have managed to melt some plastic containers in microwaves... Luckily, there are no such fast foods here in Sweden, so I am, for the most part, out of the danger zone... Except for when it comes to zapping marshmallows... man, can they get big before exploding!

Second... my kids are "hella" jealous (I thought they'd given up this slang when we left Cali)

Third... no worries... better to burn a box of crap than lovingly prepared brussel sprouts, lasagna, bean soup... at least you didn't have hours of food prep go up in smoke.

sadly, i also never learn from my mistakes. *sigh*

I just found this yummy but horribly unhealthy delicacy in Sweden last week. I usually add peas and broccoli with skim milk and tell myself it's healthy.

Ah, this a very funny post! I am still laughing!
If it is any consolation; I am a totally lousy cook. Baking is ok, but cooking - no way. We do not agree.;) I have a handsome man in my life that cooks instead.;)
Btw, Macaroni and Cheese used to be my favourite when living in the US, I truly miss that.;))

Omigod, I LIVED off of Kraft Mac and Cheese (the single serving kind they make now for kids) in the military. That was dinner at least a few days a week! I still love it.... Great story, too!

LOL! Oh my gosh! This reminds me of when I moved out on my own for the first time and attempted to make Mac&cheese. I poured the entire contents of the box into the boiling water, including the cheese pouch. I was in a hurry, so I didn't realize it. Until it was too late.

Thanks for sharing such a funny screw-up!

I know that your mother would want people to know that you were fed "healthy" food too!
There is always the story of when your Dad was cooking the pot of beans that actually cooked/burned/melted the Cuisinart pot down to a fire alarm. Fire engines etc. was NOT exciting! The dog saved the day then too!
merthyrmum

hahaha, this sounds like something I would do! I sometimes "forget" to turn off the water when I water my plants and we end up driving in a pool of mud because of it. Drives my husband crazy!

I love Macaroni and Cheese too! I have 2 in my cupboard now and I am saving them for a special day. . .like when i am depressed or homesick.

Mmmmm...Kraft Dinner...if Nakumatt ever gets a shipment of that, I am SO buying it all up.

Maybe if I was traipsing around the world I too would crave mac and cheese. But I'm here. Living with two kiddos in suburbia. Two kiddos who are addicted to said mac and cheese. Especially if there are pokemon shapes in the noodles. And I cannot eat it. I just can't. But my gross food thing - is spaghetti O's. Those remind me of childhood. And my kid don't like them. So if I buy them...everyone here will know they are for me :-)

Still in the bag.

With the twist tie on.

How fabulous. I have a world trip planned for next year, I am going to have to visit your past posts and catch up...
Robot Nine

sorry... but that was funny !!! i remember once putting the potatoes to boil without water :)

I married a mac&cheese guy. What is it with that stuff?? My kids like it too. sigh. Do you know, I get in trouble when I add REAL cheese to it... oh well, with enough ground pepper, I can eat it. Only time I messed up with mac and cheese was trying to dye it blue. You can't. Fortunately the kids were happy to have sausage octopi, goldfish crackers, in a GREEN sea of cheesy mac!

Two things learned about microwave cooking - Spaghetti-O's (something else the kids like that I blame my husband for) will bubble and POP hard enough to flip the bowl. And Brussel sprouts will EXPLODE ... little stinky veggie grenades .. all over the microwave. Pretty cool reaction actually, except the mess.

As soon as I saw where your post was going (KD in the micro with no water ...) I thought of the time I put all the fixings (except liquid!) into the bread machine. No fire, but we had quite a solid mess to deal with!

Yeah I'm so gonna need you to use a lead free glass bowl in the future!

Grin, not to worry, I love that stuff too, even hubby does ;)
And I tried a few times to make coffee without water and other things when my dingy brain worked half time :P

LOL, that's hilarious, so hilarious I had to reply.

You ain't seen anything though until you try to percolate a pot of coffee on a gas stove for 9 hours! Ye gods.