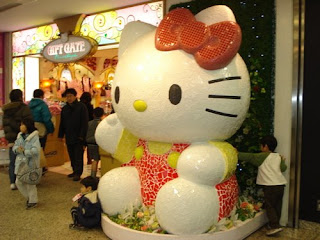 One of the many reasons I love to travel is that you always meet interesting people and see amazing things when you leave your immediate comfort zone and get out into the world. Occasionally, you wish you could continue to live like an adventuring tourist a little longer or bring some of those instant friends home with you. Then there are ones that stay with you – no matter how much you try to get rid of them.

Take Hello Kitty for example. Not to be judgmental but there is an awful lot of Hello Kitty in Japan. Despite this seeming nation-wide obsession I wasn’t able to find a single Hello Kitty factory (although we did spot a Battling Seizure Robot). I have never really understood the worldwide facination with the large faced white cat and yet in the midst of hunting for pantie vending machines in downtown Tokyo, I was drawn - as if by evil cartoon cat magic – to the Hello Kitty store. 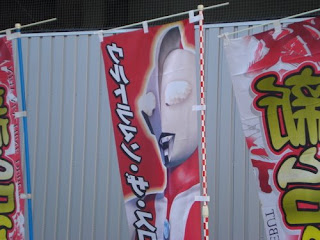 I should have known something was wrong the moment I ignored the Baskin and Robbins (aka 31 flavors of joy) to pose in front of the giant feline. Before we knew what was happening, we had been sucked inside the cat’s lair and were perusing the shelves with only the smallest trace of irony. When Hubby picked up the tiny Hello Kitty fork and made it dance we laughed… and then added it to our basket.

By the time we left, I had a pillow, fork, and huge sheet of stickers (which were not later stuck to my phone or computer) for a cartoon character I didn’t even like. And heaven knows that my 12-year-old self likes a lot of cartoon characters. 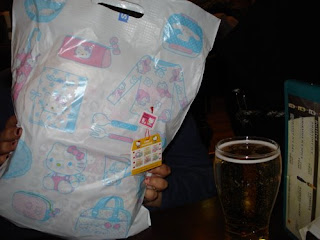 But wait – it only gets weirder from here.

Our next stop was an Irish bar just down the road. Hubby and I made something of a study of Japanese bars during our holiday and felt it would be remiss if we didn’t head upstairs and enjoy a couple of pints. Midway through our first pint, a pair of Canadian businessmen sat down next to us and very kindly didn’t smoke any cigars.

Around pint number three, when a pleasant buzz had settled over us, the gentleman next to me noticed that I was Canadian and that we had a Hello Kitty bag which we were desperately trying to hide as if it were filled with illicit drugs. “Do you know the name of Hello Kitty’s boyfriend?” he inquired between sips of his draft beer.

My first thought was, “Hello Kitty has a boyfriend?” Followed by, “Why does this 50-something man know that Kitty has a sweetheart?” Luckily for him, the good 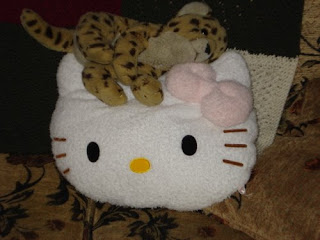 manners my mother instilled in me overrode my cider induced buzz and I merely said, “No. No, I don’t.”

“His name is Daniel,” he informed me in an oddly solemn voice.

We continued to talk to our new Canadian friends while we finished off our pints and managed to steer the conversation away from giant-headed white cats. Or so we thought. When we finally got up to leave, Canada Man asked me again, “What is the name of Hello Kitty’s boyfriend?”

By now, I was amused enough to play along, “I will never forget that his name is Daniel.” I then promised to blog about our encounter. Luckily, I never promised not to mock him in said blog.
Posted by MsTypo at 11:15 PM

How weird. I love it.

Interesting..I did not know "Daniel" was Hello Kitty's boyfriend.... And I want to travel, can I stow away some time?

Day 3 of the Where’s Wenda? Contest is here. Today I am visiting all of the SITStas that commented on Three Bay B Chicks. That means you! Thanks so much for stopping by and for being a great SISta!

I like hello Kitty. I didn't really buy much of her stuff. At least until I had a daughter. Hello kitty and Tinkerbell were forced onto her. Poor kid. Daniel huh? Interesting.

Thanks for following Wenda to my blog. I see she's already making rounds again.

My daughter likes Hello Kitty so I'm acquainted with the big cat gracing various bits of clothing that she wears. I even bought hubby a little pink Hello Kitty case with earplugs inside - very handy! ;-)

You were drawn to Hello Kitty as you sub-consciously realized that you needed her to complete your menagerie of stuffed toys back home.. right? ,-)

check out this site:

What a cute pillow...I'm not a fancy of Hello Kitty either, but I think she's adorable.

I got into Hello Kitty because they had a promo at the 7-11s here in Korea - you got magnets with purchases and there were 45 to collect. We were in competition at work to see who could collect the set first (which in my case involved a great deal of wine drinking). It was interesting to see all the Hello Kitty in Japan, but everything seemed ridiculously expensive.

Then I went to a very odd art exhibit of Hello Kitty as you've never seen her before...

Awhile back I found a great image of a goth Hello Kitty. I want the tshirt.

I never understood this craze either. Maybe it´s a Japanese thing...

No, it is not wrong that Wenda has been the highlight of your weekend!! She's been a pivotal point of mine as well. I haven't had the discipline to keep up with my own blog, though, so I'm going to have to crack down!

As for Daniel, if I see him hangin' out in NC I'll make sure to send him your way so he can hang out with you and Hello Kitty - since you're such a fan and all ;)

I love that pillow :D
And no, I usually don't dogg Hello Kitty either ;)
What a character, are all Canadians that funny?
:D

Thanks for coming by my blog... Here in Asia, Hello Kitty's a big deal. Technically though, the Canadian's WRONG.

Hello Kitty's boyfriend is called Dear Daniel. I kid you not. :)

My four year old niece is crazy about "Hello Kitty"!;) But to tell her Kitty has a boyfriend might a bit too soon.;))

Thanks for stopping!
This is a crazy game (Wenda)
Love your blog..I'll be back :)

I love Hello Kitty... had no idea she had a beau

Thanks for stopping by my blog! Your stories are great, I am sure you have had a gazillion weird and interesting experiences being overseas. I was an expat in France for 4 years, so I definitely had my fair share. :)
Bon Voyage!

My favorite line is, "there is a lot of Hello Kitty in Japan". . .try San Francisco and Hawaii, the Japanese have taken Hello Kitty over to those places too.

Daniel huh? Who knew? And do you think he is a kitty too? Maybe he's a dog or a monkey.

Never understood the big Hello Kitty craze either but if I were in Tokyo I'd probably end up doing the same thing!

Thanks for your comment on my blog. You are welcome to stop by for a meal anytime!
Your blog fascinates me. Keep up the great work.

Heya, Strange Shores is out on my blog, and you are in it!

I wonder if it's serious...

I used to love hello kitty when I was growing up...

My husband was in Japan 25 years ago and he talks about how big Hello Kitty was then. That is a long-standing obsession.

No his name is 'Goodbye Pussy, I will not call you tommorow'
And I found the line:
Irish Bar in Japan
More than humorus!