All the Gang at 42nd Street 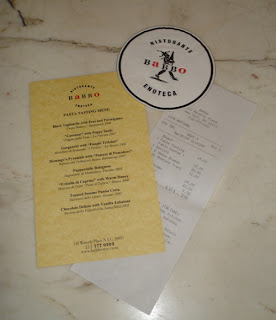 To say that I enjoyed my dinner at Babbo would not fully express how amazing the food was that night. I literally still carry the menu, bill, and coaster from Babbo in my purse to this day.

Even before arriving at Babbo, I had decided to order the pasta tasting menu. According to the website, "the entire table" is required to order a tasting menu so I was worried about whether or not I would be allowed to do so since I was dining at the bar. Thankfully, the very kind bartender assured me that my gastronomic dreams could be fulfilled at the bar without any problems. Phew! 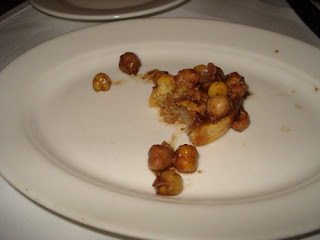 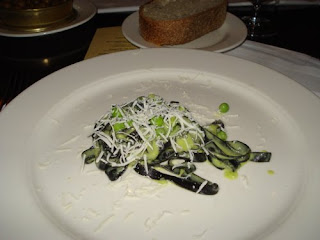 Next up was Black Tagliatelle with Peas and Parmigiano. I had no idea what peas were supposed to taste like before this meal. Who knew that these amazing little green spheres were so blissfully flavorsome? 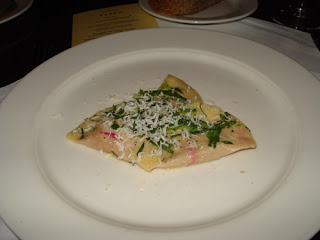 “Casunzei” with Poppy Seeds was pockets of pasta filled with beets. This isn’t the first restaurant I’ve been to lately that highlighted beets on its menu but I have to say that Mario proved why he’s the big name chef, and the rest of us are mere poseurs. Even people who don’t like beets would have enjoyed this plate, which was highlighted with nice peppery arugula. 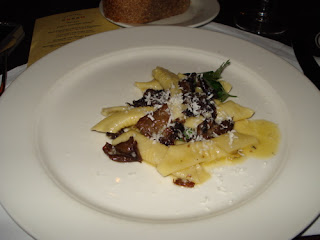 The flavours that assault you while you eat Gargnelli with “Funghi Trifolati” are divine. First you taste the mushrooms. Then the fresh taste of parsley. Then both together. And just when you think you’ve got the flavors under control the mushrooms hit you again. I’m not a huge parsley fan as I find it rather boring and often substitute cilantro instead but this dish has definitely converted me. 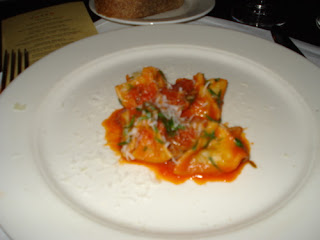 Normally when I dine alone, I bring a book and read between courses. This night I was too busy enjoying the food and anticipating what was to come next to have time for reading. Sadly though, the next course was a bit of a let down. Domingo’s Pyramids with “Passato di Pomodoro” was interesting but didn’t wow me the same way that the previous courses had. 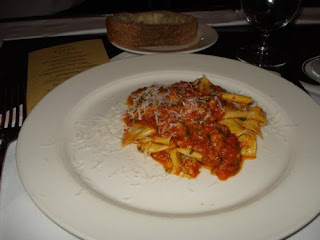 A traditional Pappardelle Bolognese was my final pasta course and definitely showed me where I needed to improve my own Bolognese in the future. The use of pancetta in the sauce was brilliant. On the downside, this final pasta course was served too hot and the portion was too large considering this was fifth plate of pasta I had enjoyed. 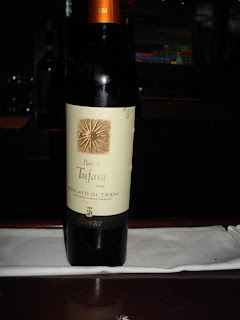 Now that my dessert courses were starting, the bartender recommended a Moscato as my final beverage for the evening. I’m not typically a big dessert wine girl but this Moscato was beyond lovely and I have looked for a bottle of it to purchase since that evening. This is also the point in the evening when I actually overheard the following statement, “Your relationship with your therapist says a lot about you and how you relate to the people in your life.” 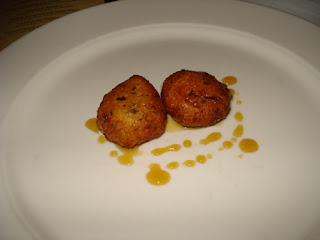 First up after my mains was the “Frittelle di Caprino” with Warm Honey. After one bite I literally said, “Foodgasm!!” On its own, the fried balls of cheese were ok, but the addition of warm honey brought it to a whole new level. I may have even put my finger through the left over bits of honey on my plate when no one was looking. 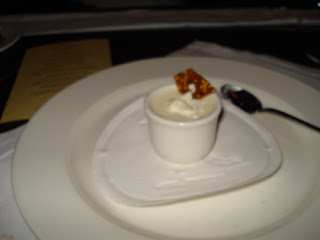 I wasn’t looking forward to the Toasted Sesame Panna Cotta since I am not a huge fan of panna cotta in general. And I’m still not a huge fan. Sorry, Mario. While this would make a lovely palette cleanser with its rich sesame flavours and clean mouth taste, it simply wasn’t my thing. 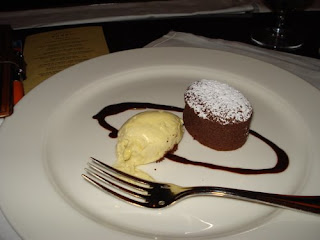 The final dessert course was a Chocolate Delizia with Vanilla Zabaione. The incredibly rich chocolate cake was accompanied by a non-traditional zabaione that was simply delightfully decadent and tasty. 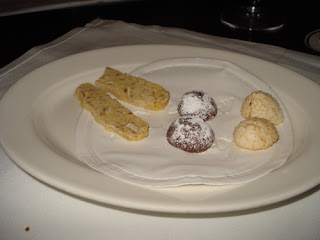 When the cookies arrived with my bill, the bartender kindly topped up my Moscato and recommended that I dip the biscotti in the wine. Keep in mind that this was my ninth course over a two and a half hour period of time so the cookies were slightly overkill – tasty but overkill. The previous week, my parents and I ate at George on Queen Street East in Toronto. One of the innovations I liked at this restaurant was that cookies were given to us in prettily decorated cellophane packages so we could take them home. We weren’t pressured into eating the yummy cookies while we were still full and were able to appreciate them at our leisure. I would like to see this done at more top class restaurants in the future.

And that, my friends, was one of the best meals of my life. Sadly I enjoyed it alone, surrounded by strangers but I’m glad I was able to enjoy the memories of that fabulous evening with you, my Friends and Devoted Readers.
Posted by MsTypo at 11:35 PM

Wow!!! Gorgeous looking dishes! 2 1/2 hour dinner?! I don't think I've ever eaten for THAT long! Fabulous! Glad you had a chance to share with us! :)

Looks and Sounds yummy. Biscotti and Vin Santo are one of my preferred (not fav) meal endings but the Moscato sounds fantastic!
Merthyrmum

Wow. It all looks amazing. I need to be more adventerous sometimes. I have this tendancy to always order the exact same thing wherever I go. So...what did they think of you taking pictures of each course??

Just found you and am so glad. I lived in Cairo for almost 9 years so am looking forward to catching up with your older posts.

I think I might have just licked the computer screen. The photos and the descriptions. Yummm. The Gargnelli with “Funghi Trifolati” sounds delectable...

Cairo!!! It's so good to have you back! I really must catch up, last I heard you were in the motherland :) Ps. this is making me very hungry!

I am so sated just reading about your gastrogamic evening! And kudos to you, my dear, for going ahead and enjoying it, even if you didn't have any company except the barman, those nine courses and your tickled taste buds!

I'm just amazed you did all this alone. I'm one of those weenies who can't eat or do anything by myself, I have to have a buddy! Your meal looks absolutely amazing, my mouth was watering the whole time! Just a little surprised you didn't have a major protein dish? oh...because reading back you ordered the pasta tasting menu...duh. It looks delicious, and that little chocolate cake had me slobbering!

Oh my, how delightful! We don't have much for fine dining here in W. Texas, so thank you for sharing...because really--it was like I was there!!

Looks like a great selection of food. Glad you enjoyed it.

Maybe they are not wrapped because they make the cookies themselves. You are a brave soul, I could not go on a culinary adventure but you have made me hungry. Thanks for stopping by my blog.

Yum, the saliva is drooling down my chin. I love trying new dishes. Thanks for the virtual feast.

Thanks for stopping by my blog, I find your travels so fun and fascinating.

That is such a wonderful meal... where did you have this?

I love posts about food, especially when you show pictures of all the delicious food you ate. Very fun.

I just told my husband I want to make reservations here for when we go to NYC. You know, that "someday" trip we've been talking about that might happen in like 5 years. :) I want this meal right now!

Ugh. I looooooove pasta, but I feel queasy thinking about all those carbs! Isn't it great to have a really excellent meal? [sigh] If only we could do that here in Cairo ....

mmmmmm, this looks so yummy! lucky you!