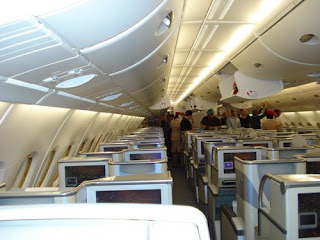 The best part of any holiday is always the journey home. (Hubby edit: it is? Remember the baggage disaster of August 2007?) While coming back to Cairo and seeing Hubby after a long absence was certainly a joyful occasion, the reason I was psyched about my trip home was because I was about to embark on a dream flight. Thanks to the careful hoarding of airmiles, I was able to upgrade to business on my flight from New York to Dubai. Better yet, I was going to fly on the top of the bus on an Airbus A380!

As someone who geekily follows travel news, I was psyched when I saw the A380’s reviews upon its release last year. I immediately told Hubby that I had to fly on 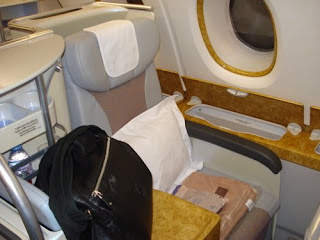 this huge plane and that I was not going to do so in “steerage” as he calls economy. Several things stood in the way of this dream not the least of which was that business class tickets are ridiculously expensive.

Thanks to the Emirates airmiles Hubby generously shared with me, I was able to fulfill this dream to fly at the (almost) front of the bus on this 14-hour flight. The first difference with the A380 is that business and first class passengers board from the upstairs lounge. So after enjoying a glass of champagne, mushroom ravioli, and a plate of profita rolls and chocolate covered strawberries, I leisurely boarded on the upper deck of the A380. 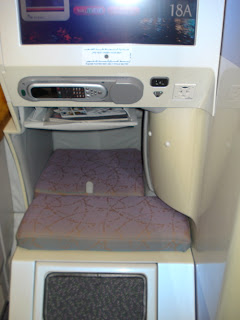 At this juncture, I should probably admit that I was being a huge nerd from the moment I stepped foot on the plane. I walked back to my seat with my jaw literally agape at the impressive appointments on this plane. I clicked away on my little pink camera and was caught by one of the amazingly nice flight attendants. “Your first A380?” she asked kindly. I nodded dumbly. “After we’ve taken off, make sure you visit the bar and I’ll make you a Grey Goose Cosmo!”

Before I could fully register the presence of a fully working bar (with numerous plates of canapés, and Godiva chocolates to nibble on) I noticed that my seat had its own mini bar. 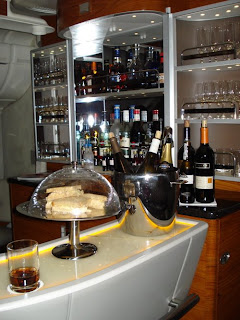 After 8 hours of sleep, I can attest that the lie-flat seats were incredibly comfortable. Interestingly, the blankets and pillows provided were a better quality than those normally found in Emirates business class. The food also was a notch up from their normally tasty fare. I have frequently bragged that the food on Emirates is some of the only airline food I will eat but the choices and quality on the A380 exceeded even their usual high quality.

Dinner, which I slept through, started with caviar and included choices ranging from lamb to freshly tossed chicken Caesar salad. The snack options were also different than those found on most Emirates flights and allowed me to try a very tasty, fresh tasting hamburger shortly after I awoke. My breakfast started with a fresh strawberry smoothie and was followed by thick, fluffy, restaurant-quality apple pancakes, accompanied by Vermont maple syrup. 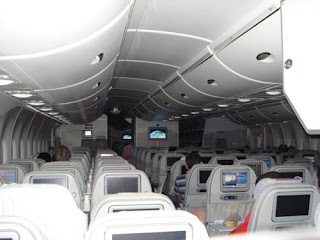 I was lucky that I had sufficient airmiles to allow me to fly on the top floor, so I decided to take a quick visit downstairs to see how I would have been flying were it not for Hubby’s generosity. In comparison to Business Class’s four seats across, Economy packed 10 seats across three rows in a 3-4-3 arrangement.

Sadly, one thing I noticed in both Economy and Business was the dearth of passengers. Downstairs, most people were able to stretch out across several seats when they slept. Upstairs in Business, at least half the seats were empty. Since there are multiple flights a day between JFK and Dubai, I’m not sure if this was a result of people not wanting to take the later flight, or an indicator of a lack of interest for travel between these two cities.

I was never able to visit the very front of the bus and see the famous showers but I can hardly credit that First Class could improve upon the service and comfort of Business on the A380. From lounging in the bar area with my fellow travelers to being urged by the wonderful flight crew to pose behind the bar for photos, I can now say that I am officially impressed. The first time Hubby upgraded me to Business I told him my days of flying Economy were over. Well, Hubby, I have bad news for you because from now on I’m only flying A380 Business!
Posted by MsTypo at 11:46 PM

Sounds like quite a flight! I recently got a free upgrade to business class on a flight from LA to Florida (first leg on my way to St. Lucia). I was very impressed with the fully reclining seats, etc. I might not hate flying so much if I could afford to fly like that all the time! : )

I hate flying in the sardine class... but I think I could get used to this height of luxury!

Now this is the kind of info I love to read! LOL (Honestly)

That's a cool plane! I have to admit I'm a little afraid to go on it - it's too big!

Oh - and wish I'd known you were home for so long, I would have mailed you your knitting needles! Nevermind, I will find a way haha.

I really enjoyed reading this! I am thoroughly fascinated by the A380 Airbus. I have only flown on the jumbos, but I will probably never be able to afford flying first class, on any plane. Furthermore although planes hold my fascination, I am also a very nervous flier and I opt for car or train travel always these days. I guess the only way get to experience that huge plan is through wonderful post such as yours.,))

Wow, lucky you. Who knew! Maybe better I didn't know what I miss.

I have to do the commute to Australia every few years which takes up to 30 hours en route.
My survival technique is to sit by the window and pretend I'm out on the clouds. Very roomy! :)
You really slept through dinner??

Profiteroles? You never told me!!
I also can't believe that you slept through cavier etc. but the bar looked great too and I'm sure you went to check it out.
merthyrmum

Now that is the way I was born to travel! I would have been checking everything out with my jaw on the floor too!

Congrats to you! I haven't flown on the Airbus and I always wanted to fly the Concorde.

I used to love to fly business and first class on Swissair and Lufthansa because they were excellent in the 80s and 90s. Too bad to hear that Gulf Air has gone down hill though.

I don't fly. Because the arm rests in steerage threaten to cut my hips off. Which might not be such a bad idea...but I might bleed all over whoever is unfortunate enough to sit next to me.

WOW thats really impressive! I've only flown 3 trips and i'm what you would call a "nervous flyer" lol...maybe all I need is a Grey Goose Cosmo to loosen me up :)

Ok, I´m totally impressed!! And jealous!
Interesting fact. My brother-inlaw helped build the A380! He´s from Germany, and was on the ingeniering team, but lived in France while working on this project.

I think I could get used to flying like that! You must have felt like a celebrity!

I did not even know that such airline luxury existed. I think economy is definitely dead to you. How could you ever go back?!

This definitely looks like the way to go! I get so claustrophobic when I fly!

I don't know if I would have gotten off the plane!

Darn....with bar and all.
More than impressive alright?! :D
I know now what to book next time we have to fly that way :D

I love this and it feels like you were on a five star hotel in the sky. I agree look at that bar!! Though two drinks and I'm done.

For a giggle come stop by and check out the top ten reasons how you know you've lived in L.A. for too long.

Wow! What an amazing experience. But you slept through dinner???

i love to fly, and it's so much better in the luxury seats!!

soooooooooooooo jealous! i flew business class once - it spoils you forever, and that was before the time of lie flats! thanks for stopping by!

I hate to fly. I do not sleep in a moving vehicle, and I am tall... meaning my legs simply do not FIT into cattle class seats without being bashed up against the seat in front. blech! I've been the lucky recipient of unexpected upgrades in the past though, which is always nice. Traveling across the US once, we tried to do the self-checkin with our etickets. It didn't work. We went to the counter and were informed that economy had been over-booked, by a HS marching band. Was it ok if they'd upgraded us to first class??

Wow- that sounds wonderful! Thanks for sharing your thoughts and for the pictures! I hope that I will be able to do this someday too... :)